In the Spanish land of Toledo, Lucas Vazquez de Ayllon was born in 1475. The colony of San Miguel de Gualdalpe was discovered and colonized by this famous explorer, in 1526.

Ayllon was a sugar planter by profession and practiced his business in Hispaniola. He set sail with his fleet to accomplish his aim in July of 1526 from the coast of Santo Domingo. He and his fleet reached the Winyah Bay on the 29th of September of the same year.

On finding that the region that lay north and was close to the Pawley’s Island was unsuitable for being made into a colony, Ayllon decided to travel southwards travelling most probably both by land in the form of a voyage that was overland as well as by sea with the help of boats Lucas Vazquez de Ayllon and his men set a new record for European explorers and their colonization patterns and techniques in the Americas. 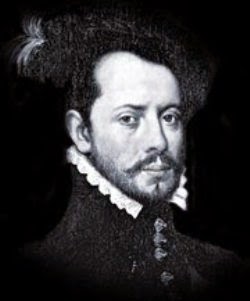 The land and sea groups came together on the 8th of October of 1526. Here they set up the colony which they named the ‘San Miguel de Guadalpe’ situated near the area now referred to as Georgia.

In Santo Domingo, Ayllon became an important member of the Real Audiencia and Charles V granted him land that had been explored by Gordillo and Quejo in the year 1521. Lucas Vazquez settled down on this land and began the tradition of employing slaves from Africa in the US. It was here that he breathed his last on the 18th of October, 1526.

His colony could not withstand the hardships that it had to face. Very soon its inhabitants and the colonizers themselves gave up in the face of extreme conditions. Within the short span of three months the colony fell prey to shortage of proper materials and food. Different diseases and hunger spelt doom for the colonizers.

Their relations with the natives of the land also led to the loss of their control over the localites. The situation became such that only 150 out of the 600 men that Ayllon had brought with him could survive through the adverse conditions. These men went back to Hispaniola.

Lucas Vazquez de Ayllon was an able administrator and he started many new trends in the history of Spanish explorations. His colony though survived for a very short period of time was the first of its kind in the US. Even today historians are trying to find out more information about this great man and his explorations.