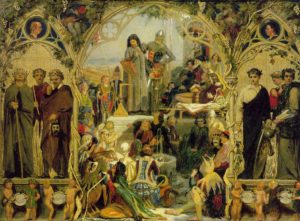 A poem can be defined as ‘a literary work which is enhanced by the use of meter and distinctive style and rhythm.’ The poetic form finds its origins in the oral storytelling tradition, which then evolved to encompass the various movements along the ages.

We are going to explore the three of these periods and the different forms of poetry in each of them as we go forth. With poems from Shakespeare to John Donne, from ballads to sonnets, we are going to traverse across the changing landscape of poetry.

The period of Middle English sees the development of the gradual weakening of the inflexional system of the Old English period. There is an appearance of idiolect of the author in the texts written in this period along with the influence of Scandinavian and French languages. This period saw the domination of poetry as the major literary form and the use of poetry for subjects which would be otherwise expected to be written in prose. The three major groups into which the poetry of this age can be divided into are: Chronicles, Religious or Didactic poetry and The Alliterative poems.

The Early Modern English period sees the establishment of English as a standard language to write in. The French and English have amalgamated to form the standard English tongue, which attained its full expression in the works of Chaucer. This period also sees the emergence of Scottish literature.

Firstly, we have Renaissance poetry, which was a cultural and intellectual awakening during the reign of Elizabeth the First. Renaissance literature refers to European literature which was influenced by the intellectual and cultural tendencies associated with the Renaissance, which focused on new and daring ideas and changes within the society. There was an ardent revival in study of the Greek and Latin and these classical languages tempered and polished the earlier roughness of the English language, morphologically.

The major poetic forms during this period were the dramatic poetry, lyrical poetry, descriptive and narrative poetry, religious, didactic and satirical poetry.

Then comes the period from the Restoration Era and until the end of the 1800’s. There was an inevitable reaction against the Puritan manners and Charles set the tone for Court Wits, which set the tone for the majority of literature, especially dramatic comedy. The poetry of the late 18th century and the early 19th century which was associated with Romanticism, redefined the romantic ideals of representation of nature. The period from 1750’s to 1800 was the ‘Age of Transition’, when there was a shift of poetry towards Romanticism. There was the decline of the heroic couplet and a free use of the Pindaric ode, which appeared in the middle of the century.

This period was dominated by the heroic couplet, which is two lines in iambic pentameter form, the lyric form, the ode, the satiric form, narrative poetry, the epic and the pastoral. There was a return of other forms of poetry such as the ballad, the descriptive and narrative poems and finally, the rise of the lyric.

The period from the 1800 to the 1900’s was a period that can be said as the most productive period of the modern English poetry as we see today. There were a multitude of phases that characterized this century. Firstly, there was a return to nature from the years 1790-1850. From the 1820’s to the end of the nineteenth century, or what we would call the Victorian era, intellectual development, tenacious morality, and education dominated the poetry of that day.

There are a multitude of poems that we will explore through our patient exploration of these major periods and movements.