Sir Thomas Wyatt was born in 1503 at Allington Castle, Kent, to Sir Henry and Anne Wyatt. There is little information about his childhood education. In 1516, he studied in St John’s College, Cambridge. Sir Thomas Wyatt was the famous 16th century lyrical poet. His poems mostly reflect classical and Italian models.

He was also inspired by the work of Chaucer. Thomas’s father, Henry Wyatt was one of the Privy Councillors of Henry VII and an trusted adviser to Henry VIII when he became the King in 1509. Thomas was known to have accompanied his father to the King’s court. Sir Thomas Wyatt and Surrey are regarded as ”the father of English sonnet”. 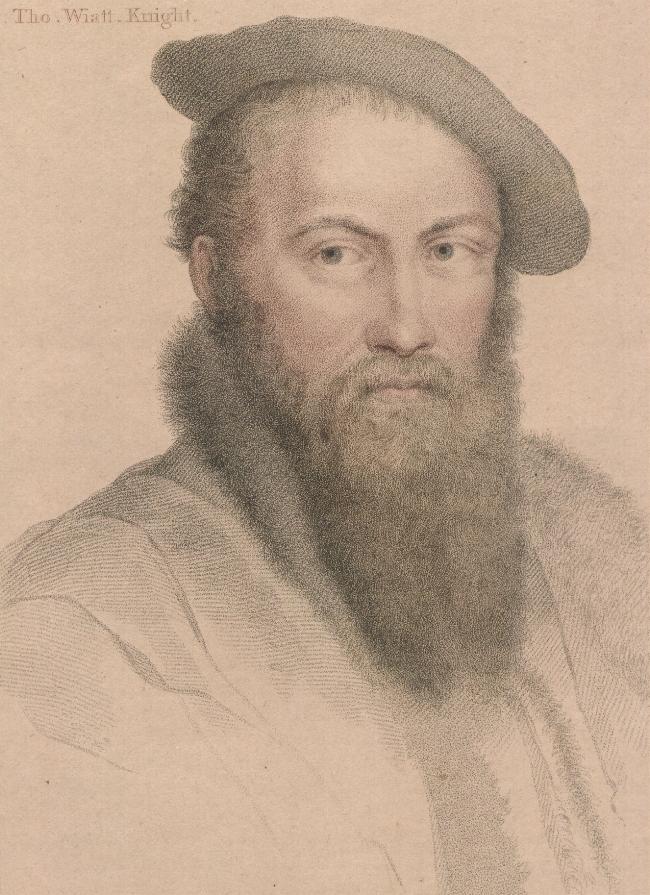 In 1516, Sir Thomas Wyatt appeared for the first time in court as Swear extraordinary to Henry VIII. Sir Thomas Wyatt was seventeen years old around 1520, when he married Eliazbeth Brooke, daughter of Lord Cobman. A year later,in 1521 they had a son, also named Thomas Wyatt.

Some time closer to 1525, Sir Thomas charged his wife with adultery which later on led to their seperation. It was during this time that he started liking Anne Boleyn. In 1526, Sir Thomas went with Sir Thomas Cheney to France on a diplomatic mission. In 1527, he accompanied Sir John Russell to Venice and also the Papal Court in Rome.

They had gone to Rome for the purpose of filing a petition for the annulment of the marriage between Henry VIII and his first wife Catharine of Aragon. From 1528-1530, Sir Wyatt was the High Marshal of Calais. In 1532, Sir Thomas had gone with King Henry VIII and Anne Boleyn to Calais and in 1533, King Henry and Anne were married. Sir Thomas even served in the coronation of Anne Boleyn in June 1533.

It was believed by some that Sir Thomas was arrested by the army of Emperor Charles V when they captured Rome. He however was successful in escaping from Rome and coming back to England. In 1535, Sir Thomas Wyatt was awarded the Kinghthood. However, in 1536, he was imprisoned in the Tower of London for his alleged act of adultery with Anne Boleyn.

It was when Thomas was serving his term, that Anne Boleyn was executed. Sir Thomas is believed to have written a poem after Anne’s execution which speaks about grief and shock. After being imprisoned for a year, Sir Thomas was finally released. In 1541, Sir Thomas was charged with treason.

This was the revived charge made against him in 1538 by Edmund Bonner who, by this time was the Bishop of London. On the basis of the charges, Sir Thomas was again sent to serve a term in the Tower of London. He got a royal pardon on the request of the then Queen Catharine Howard and was completely restored to favor in 1542.

After his release, Sir Thomas Wyatt was given number of royal offices but his health suddenly deteriorated and eventually Sir Thomas succumbed to his illness and died at Sherbone on 11th October 1542 when he was around 39 years old. Sir Thomas Wyatt thus died at a very young age.

During his life time, none of the poems written by Sir Thomas were published, except a few poems in a miscellany by the name, The Court of Venus. After his death, for a few years, his work was considered to be inferior to his contemporary poet, Henry Howard, Earl of Surrey. But again in the 20th century, his poems were appreciated and C.S.Lewis even called him ‘the father of the Drab Age’.

It was fifteen years after his death in 1577 that his poems were published. Many years after Sir Thomas’s death, his son, also named Thomas Wyatt was the rebel leader during the time of Mary, Queen of Scots. His rebel was known as Wyatt’s Rebellion. For his part in the rebel, Sir Thomas Wyatt, the younger was tried at a trial without any defense. In 1554, the younger Wyatt was executed and some portion of his property was restored to his son George.