It is believed to have been Catherine of Aragon that introduced the wearing of the farthingale to the English court, when she arrived from Spain to wed Arthur, Prince of Wales, who was the elder brother of Henry VIII. However the wearing of the Spanish farthingale can be traced back to the late 1400’s in Spain and Portugal.

A farthingale is simple a structure designed to be worn beneath a gown in order to define its shape. However there is a belief that the farthingale was designed by Joan of Portugal in order to disguise her illegitimate pregnancy. 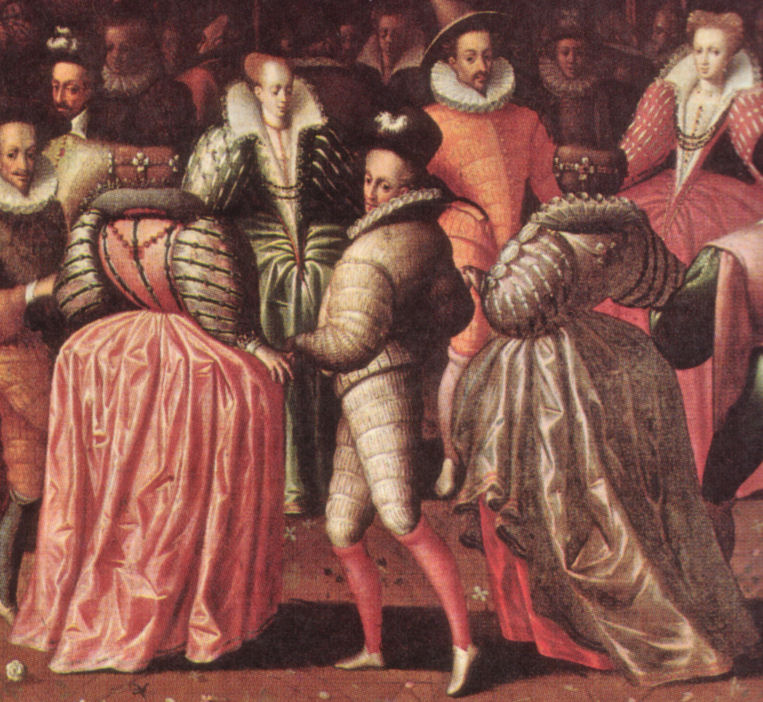 The farthingales worn at the court of Henry VIII were simple, it consisted of a hooped frame which was stiffened with willow cuttings known as osiers or occasionally rope. Whalebone started to be used to give the structure their defined shape in around 1580.

While the earliest depictions of the Spanish farthingale show the hoops on the exterior of the skirts, by the time the fashion reached the Tudor court with Catherine the hoops were hidden beneath the skirts. The farthingale was an essential fashion item in the Tudor court and continued to be popular in Spain up until the 17th century.

Where the Spanish farthingale had given a Tudor woman a delicate, conical shape, the French farthingale was designed to accentuate the hips. Also referred to as the wheel farthingale, the fashion arrived at the English court in the late 1570’s and was instantly popular with Queen Elizabeth.

According to wardrobe accounts written at the time the French farthingale could be made from a number of different materials including linen and buckram (a kind of canvas like material) which would be stiffened and formed into shape with the use of whalebone or wire. There are also references to these bum-rolls as they were referred to as being starched into shape.

Rather than having a frame, the French farthingale was a kind of roll or bolster which was fastened around a woman’s hips. This made the skirts of the gown wider, accentuating the hips and allowing the material of the gown to drape.

The great farthingale, which was again popular with Queen Elizabeth, is believed to have evolved from the design of the French farthingale. This style became popular in the late 1590’s towards the end of Elizabeth’s reign. There are a number of references to the queen having such garments in her royal wardrobe.

It was called the great farthingale because of the excessively large circumference of the skirts which provided the wearer with the silhouette in vogue at the time. It is thought to have been constructed from more than one hoop which provided height at the back, while dipping low at the front.

It is thought to have been designed in this was so that it elongated the torso of the person wearing in, while making her legs look shorter than they were. The great farthingale was still being worn for court occasions in the early 17th century.