Vasco da Gama was known for his firmness and fortitude. He was a forceful individual. Vasco Da Gama took the command of that expedition when his father died. In July 1467, he sailed from Port Tagus in Lisbon, Portugal with his 4 ships, under the order of King Manuel I. Gama voyaged to find a sea route to East Indies. Gama’s expedition was led by the three Gama brothers, namely Paulo, Vasco and Nicolao.

Gama sailed around Africa’s Cape of Good Hope and reached the coast of Natal. After the death of his father, Vasco da Gama took the charge of the sailing expedition. He sailed from Lisbon in July 1497 and arrived in Calicut, India the following year. After his voyage from Africa to India, King Emmanuel I conferred on him the title ‘Dom’ or lord. On returning, he was welcomed with a grand celebration. 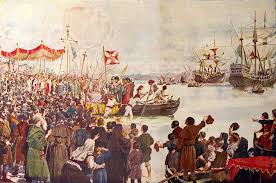 Soon after his return da Gama retired to his residence in Evora, possibly from pique at not obtaining so high rewards as he expected, but more probably in order to enjoy the wealth and position which he had acquired; for he was now one of the richest men in the kingdom. He had married, probably in 1500, a lady of good family, named Catherina de Ataide, by whom he had six sons.

According to Correa, he continued to advise King Emanuel I on matters connected with India and maritime policy up to 1505, and there are extant twelve documents dated 1507-22 which prove that he continued to enjoy the royal favor. The most important of these is a grant dated December 1519 by which Vasco da Gama was created count of Vidigueira, with the extraordinary privileges of civil and criminal jurisdiction and ecclesiastical patronage.

Back in Portugal, da Gama was granted further privileges and revenues and continued to advise the king on Indian matters. After 20 years at home, in 1524, he was nominated as Portuguese viceroy in India and sent to deal with the mounting corruption among Portuguese authorities there. Arriving in Cochin, he fell ill and died on 24 December 1524. In 1539, his body was taken back to Portugal for burial.