Nina Ship: It is a known fact that Christopher Columbus had three ships when he had set out on his very first expedition in the year 1492. Nina was one of the three ships. This ship was also known as Caravel. A caravel was a ship that had a shallower draft as compared to a Nao.

Nina was the smallest ship among the three ships that were taken on the voyage having very little space for storing cargo. Nina, being the smallest vessel, had the capacity of carrying only a small number of crew members on board.

Nina, the smallest among the three ships was commanded by Vincente Anes Pinzon, brother of Martin Alonso Pinzon. As no one had actually had the glimpse of the ships, it was believed that Nina probably weighed around 50-60 tons.

It was also said that this ship had four masts, a rare sight in those days. The mats also contained a small counter mizzen at the stern with another lateen sail. The ship also had lateen sails when she began her journey from Spain.

It is said that when Nina set out into the waters to carry on with the expedition of searching the New World, the ship’s cargo was completely filled with food, water, and weapons. Live animals like Horses, Cows, Pigs, and chickens were taken on board. 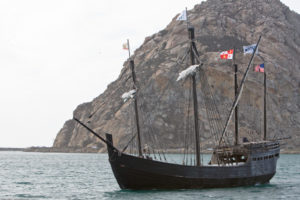 The meals for the crew members were cooked in a firebox that was kept on the decks in the bow of the ship. It can thus be seen that the voyage planned by Christopher was not an easy one.