One can do this by following the studies of the pieces of evidence placed forward by the archaeologists and then combine it with the literature, art and writings of the Europeans during that time period.

How to make Anglo Saxons clothes?

There are many points which are to be considered in order to understand how did the Anglo Saxons make their clothes.

Being spoken of a generalized clothing system across all genders and the different types of people, likely, common man, soldiers, etc. let us now go through what clothes do Anglo Saxons wear by bifurcating further between men, women, children, soldiers, etc.

What clothing did Anglo-Saxons wear?

The Anglo-Saxon people mainly wore clothes made of natural materials such as wool, cotton, linen etc. The men wore tunics with long sleeves made generally of wool. They had trousers held up with a belt containing pouches for knives and other tools.

The women usually wore under-dresses of wool or linen and an outer-dress called “peplos”. The outer-dress held on to the under-dress with two brooches on the shoulder. Women were also fond of jewellery and wore necklaces, rings etc.

According to the archaeological excavations which were held in 1990, there were three graves discovered of men from the 7th century. These graves consisted of bands which were table woven. The remnants of the clothing were discovered to be a garment which looked like a jacket.

From such pieces of evidence and studies, the beliefs of the historians is that the Anglo Saxons warrior clothing were wrapped over jackets which were of knee-length and the wrists of those jackets narrowed towards to wrist. The jackets were also decorated similar to a chain mail.

During the era of the Anglo Saxons, the typical dress which was worn by the women was a long garment which went right up to the armpit. This dress was usually worn above an innerwear with sleeves. The front to the back of this garment was clasped by brooches located as the shoulders which would be fastened.

Regarding a head covering, it is quite unknown to date whether there was one. This dress of the women was designed in such a manner that it could be adjusted according to the height and weight of any women.

According to the archaeological studies and the studies regarding the analysis of the artefacts, very less information could be retrieved regarding the clothes that were worn by the children of the Anglo Saxons.

What did Anglo-Saxon children wear?

However, with whatever evidence or remnants could be found, the historians believed that the clothing of children was more or less similar or same to that of the adults. The common accessory of the children was found out to be beads.

Men amongst the Anglo Saxons used to wear tunics which were either knee-length or shorter. The tunics were designed in such a manner that there was no need for any clasps. When one used to put the tunic over the head, it would properly sit and fit around the neck thereby eliminating the use of any laces or ties.

This also indicated that the garment was of one continuous piece. Along with this tunic, the men wore a belt with a buckle.

This study of the dressing sense of men, women and children of the Anglo Saxons not only gives us an insight and a relatable picture on what clothes did the Anglo Saxons wear but also gave us quite relative information on how did Anglo Saxons make their clothes. For more relevance and clarity regarding the same, one can also refer to the pictures of Anglo Saxons clothes.

The shoes worn by the Angl0-Saxon people were usually made of leather and tied up with toggles or laces. The shoes were usually quite big and therefore required to be fastened. They resembled modern-day boots. 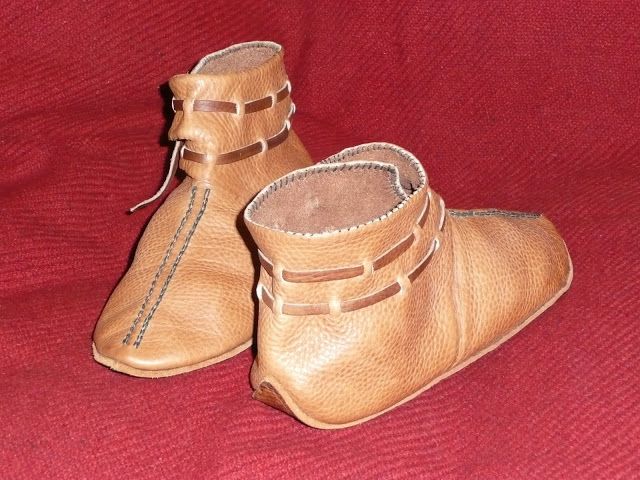 Cloaks were often worn over the attire especially by men. The cloaks completed the dress and provided warmth in the winter. They were rectangular in shape and often came with a headcover.

The only jewellery which could be extracted from studies for men were either belt buckles or brooches either made of silver or base metal.

The jewellery which was worn by children was common amongst boys and girls except for the design. Bangles for wrist and ankle, beads and neck rings were the most popularly used jewellery by children.

The most common jewellery of women was a part of their clothing, that is, brooches. Apart from that, they used to wear very simple ornaments for the neck which were either made of glass beads or were made of bead strands which were hung on the metal rings.

Thus, we now get a complete picture of the Anglo Saxons clothes and jewellery.

There are also a number of evidence by the archaeologists themselves which quite contradicts such assumptions or insufficiently suffices it thereby making the Anglo Saxons re-enactment clothing difficult but more or less gives us a rough idea about the dressing of the Anglo Saxons.