Edward Teach or Blackbeard is believed to have been born in 1680 and stayed in England prior to his pirating career. There are however no traces of his birthplace. Blackbeard was one of the most feared and loathed pirates ever known. Blackbeard got his name from the large black beard he carried which nearly covered his face.

To terrorize his enemies, he would light the hemp on his hair during the times of battle. Edward was uncommonly large man and was known to carry two swords, knives and pistols. The impact of his appearance was such that even some members his own crew was petrified of him. 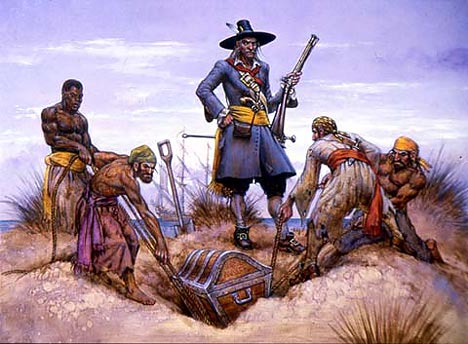 His image was so powerful that many a times, his victims would submit without conflict. In such cases, he would take the valuables, weapons and rum and allow them to go. Where there was resistance, he would kill the crew or leave them somewhere to die of starvation. Edward started his career in 1713 as a crew member on a Jamaican ship under the control of Benjamin Hornigold.

In 1716, he was given a small ship to control. In 1717, Blackbeard and Hornigold started sailed together they captured a 26 gun French craft known as the Concorde which was built in Britain.

Hornigold soon retired but Blackbeard decided to transform the newly acquired vessel into his flagship. Blackbeard thus made the vessel better than before and its guard was raised to 40 guns. This developed ship was called the Queen Anne’s Revenge.

Queen Anne’s Revenge later on got together with a private ten-gun pirate ship called the Revenge, under the control of Stede Bonnet. Blackbeard realized after some time that Stede did not have the appropriate skills to be a leader.

He appointed someone to control the Revenge and Stede was made a ‘guest’ on Queen Anne’s Revenge. Blackbeard’s flagship got lost sometime after his capture of the Revenge. 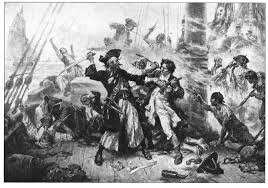 Also, a small ship was lost trying to assist the Queen Anne’s Revenge. He had abandoned the Revenge and taken its possession leaving some of the crew to die. Revenge was renamed Royal James and Blackbeard’s crew was now serving Stede.

How did pirate Blackbeard really die?

Blackbeard’s ship flag also petrified people. It depicted a skeleton with horns holding an hourglass and intimidating a heart that was bleeding because of a spear. Blackbeard died in November 1718 in a battle with the Royal Navy ships under the command of Robert Maynard.

Blackbeard, otherwise known as Edward Teach, was a notorious pirate who terrorized the seas off the coast of North America and the Caribbean in the early 18th century. Though his career as a pirate was relatively short-lived, Blackbeard amassed a considerable amount of wealth and infamy during his time on the high seas. In November 1718, Blackbeard met his end in a battle with a British naval force led by Lieutenant Robert Maynard. Blackbeard was shot and killed during the fight, and his body was later decapitated.

Blackbeard’s death has been shrouded in mystery and legend over the years, and there are many different stories about how he met his end. Some say that he was killed by a single shot from Maynard’s gun, while others claim that he was stabbed multiple times before being decapitated. Whatever the case may be, one thing is certain: Blackbeard’s death was a bloody and brutal end for one of history’s most notorious pirates.