Music was a vital part of entertainment in Elizabethan England. Unlike today, music was not recorded, it was all live. One had only to go to operas, street side musicians, theatre or the court where even better musicians played. The musical instruments varied from strings, to percussion, keyboard and wind.

The most well known of all musical instruments in Elizabethan era, was the “virginal”. It was made like a harpsichord, just rectangular in shape. The concept of group musicians or an orchestra emerged during the Elizabethan time. A few or more people would play different instruments in harmony, thereby, increasing the emotional value of music. The Elizabethan era boasts of soulful and more expressive music than earlier period in England.

Among strings, the lute was a common favourite. It is also an early form of the guitalr. The difference between a modern guitar and a lute was that the latter had only three strings and was more often than not used as a accompaniment for story – telling. It was a personal favourite among bards and minstrels. Cittern was a tinier version of the lute. 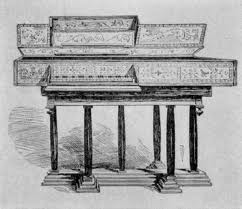 Rebec and viol were two more stringed instruments. The viol was an ancestor of the violin. Viola da Gamba, a type of viol which was huge was laid on the knee and played.

Since dancing was a well liked pursuit in the Elizabethan era, music was specially composed for such occasions. The main attraction at balls and parties was the dancing. The dancing in Elizabethan England was classified according to one’s social stature. 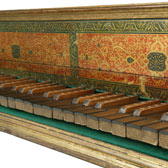 Commoners and people from the coutry would do the Morrison dancing, the jig, brawle, etc. And the higher strata would indulge in Pavane or galliard. The music varied from fast paced and lively, to slow and sonorous.

Elizabethan composers like William Byrd, Orlando Gibbons, John Dowland, Robert Johnson, Thomas Tallis, John Farmer and Thomas immortalised Elizabethan music and were the ones to witness and perform the birth of an organised orchestra.