Born in Saint-Malo in the year 1491, Jacques Cartier hailed from France and was a significant explorer of his time. One of his major claims to fame was his discovery of the river St. Lawrence. He was trained in navigation from Dieppe and was known far and wide for his excellent navigation capabilities. He accompanied Verrazano to expeditions to the New World and traveled to the Newfoundland around 1500.

It was the king of France who sent Cartier to complete what Cabot could not and in the year 1531, Jacques Cartier was chosen to discover the sea route to reach the Pacific Ocean from the north-western passage. It was in April that year that Cartier started from his hometown and sailed through Newfoundland within a few weeks. 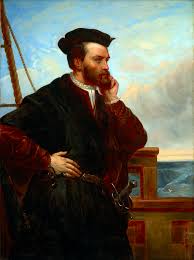 It was at this time that he discovered the lands of Prince Edward and Magdalen islands. After this, he sailed through and captured Gaspe Peninsula. However, he made the mistake of thinking river St. Lawrence to be a bay and thus could not interpret the magnitude of his discovery.

His accounts of his travels made many other travelers interested in the New World and the treasures that lay in it. It was only in 1535 when Cartier went to river St. Lawrence again that he recognized what he had discovered.

How did Jacques Cartier Die

This time he continued in his journey and set base at Montreal and then arrived at a Quebecan village to take a halt. However, it was at this village that many of his men fell ill and died. He, in fact, took many of the inhabitants of the village as his prisoners in order to search for a gold mine that never really existed in reality.

He then helped establish a Canadian colony in 1541but he could not find an adequate number of his fellow countrymen who wanted to make a journey to the New World and endure the struggles that it entailed. In this project, he was together with Roberval.

However, after a lot of struggle when men were found and brought together by Roberval Jacques Cartier ditched his partner and ran back to France. Jacques Cartier was not successful in fulfilling the aim of finding a passage through the northwest which he had set out to accomplish. However, he was remembered for the contribution that he had made to his nation.

The accounts that he had left behind of his travels were instrumental in encouraging future explorations by the French to find newer territories in Canada. His discovery of the St. Lawrence River was also a major French achievement.