Queen Elizabeth, I ruled England from the year 1558 until her death in 1603. Religion during her reign was distinguished between Catholicism and Protestantism.

Elizabeth was a Protestant by heart. It was during this time that Puritanism, a new reform movement held by the protestants started in England. It was a drive against Roman Catholic beliefs and practices.

The Early History of the Protestants

Mary Tudor was the first Queen of England and was a devout Roman Catholic. She was nicknamed the “Bloody Mary” for her cruelty and aggressive reform movements to restore Roman Catholicism in England.

In early England, any defiance against religious beliefs of the country and the queen was punishable by death.

During her reign, she prosecuted and killed over 300 protesters. They were burnt alive at stake and her barbaric actions are still noted in history as one of the most gruesome punishments for heresy.

After her death in 1558, her half-sister Elizabeth I preceded the throne and she tried to re-establish Puritanism in England.

Elizabeth was both a secular and a spiritual leader. She believed that Catholicism and Protestantism are two branches of the same religion and could exist harmoniously together.

Elizabeth was tolerant towards the Catholics and she wanted to maintain an order of balance in the diverse religious beliefs of the people in her kingdom.

The government enforced special laws and regulations and all Catholics were supposed to follow certain jurisdictions.

These were the laws of the sovereign stage and any diversion or collision against these established principles of the Church was regarded as a mutiny against the Queen herself and were punishable by law.

Life of Catholics in Elizabethan England

Until 1555, everyone was Catholics in England. It was not punishable to be a Catholic in Elizabethan England as long as you don’t practice the Catholic faith.

Puritanism was the State religion and every church was a Protestant church. It was illegal to be a Jesuit or Roman Catholic priest. As a result of which Catholics lost not only their freedom to worship but their civil rights as well.

Everyone was supposed to attend Church services once a month and it was mandatory to attend the churches for Sunday services. A fine of 12 pence was subjected to those who were absent. Later it was increased to 20.

Attendance to mass, religious catholic activity was strictly prohibited and a fine up to 100 marks was levied upon. Organizing a mass was punishable by the death penalty. However, it was not practised until 1577 when situations got out of control.

Many Catholics occupied significant posts in Government services. Elizabeth did not want to disrupt the smooth flow of governance and avoided unnecessary violence.

However, still, Catholicism was prevalent in remote villages away from the eyes of the Queen. Wealthy families provided shelter to Catholic priests and often hid them in “priest holes”. Jesuits would arrange secret masses in the manor houses.

How did Elizabeth treat Catholics?

Elizabeth was always careful to avoid unnecessary religious violence and treated Catholics with lenience. Although England was protestant at that time, she tried to accommodate the Catholic beliefs in the system as well, so that they would not feel marginalized and would be encouraged to go to the church.

What did Elizabeth do to solve religious issues?

Elizabeth made a new religious settlement that was inclusive and open. She had inherited a nation that was torn with religious conflicts but Elizabeth was determined to build it into a peaceful state. Elizabeth knew that choosing to remain a Catholic state would mean surrendering power at the hands of Rome and having to become an ally with other Catholic states.

Elizabeth herself became the supreme governor of the state and the head of the church with the Act of Supremacy. The Act of Uniformity assured that although England was a protestant state, certain catholic practices were also allowed. The bill was debated hotly but finally passed. 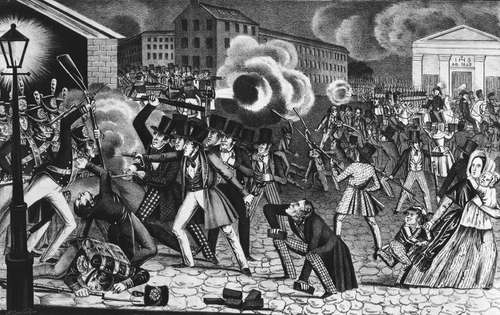 Revolt of the Northern Earls

In 1569, the “Revolt of the Northern Earls” led by Thomas, Earl of Northumberland and Charles, Earl of Westmoreland took place in order to restore Catholicism in England.

The incident was a major blow against Elizabeth. Many questioned her reluctance against Catholics and her tolerance.

The Papal Bull was passed against her saying that she is incapable of her throne.

Elizabeth was now afraid that Catholicism was becoming an impounding threat to her country. The fresh drive of Jesuits in England was also imposing a major threat to her reign and religious solidarity.

How serious was the Catholic threat to England?

Elizabeth’s religious settlement was not happily accepted by many Catholics in England.  The fear of a Catholic uprising and a plot against Elizabeth was a constant threat to her. The powerful countries in Europe at that time – France and Spain – were Catholic and the plots against Elizabeth often had backing from these countries.

The 1570 Papal Bull openly encouraged plotting against her. The Catholic missionaries were also encouraged to try to convert people back to Catholicism. Mary Queen of Scots was seen as a potential figure who could replace Elizabeth and therefore, was encouraged to plot against her.

The Babington Plot was one such plan to kill Elizabeth and restore Catholicism back in England. Besides that, Elizabeth had to face many such plots and schemes from the Catholics and Mary Queen of Scots was the figurehead of all of them. Elizabeth’s network of spies and her shrewd diplomacy, however, defeated them all.

In 1585, Archbishop John Whitgift passed an act of Parliament which stated that all priests and Jesuits should be driven away from England.

On 29 April 1559, new Penal Laws were passed against the Catholics. There were restrictions on attending masses and non-attending of Anglican services. There was a penalty for not taking the Oath of Supremacy.

The same year the Recusancy laws came into action and the Elizabethan Prayer Book was introduced as a religious settlement for the conformity of the law.

These laws were mainly implemented to bring uniformity and unity of people under one common belief.

In the initial years, the act was fairly moderate but the tragic incident of “The Massacre of St. Bartholomew’s Eve” in 1572 was an eye-opening event for Elizabeth and she feared for the rise of a mutiny.

On St. Bartholomew’s Day in 1572, there were numerous events of mass murder French Catholics and priests on the streets of Paris and France. The massacre threatened the Queen and her counterparts and they feared for their lives and safety of England. There were stories about potential Catholic invasion and conspiracies against the Queen. So, the rules and punishments were intensified and more stringent actions were taken against the outlaws.

The local authorities became more alert and started imprisoning the outlaws and in certain cases death penalty for serious offenders against the Queen.

The Catholics led a life of torture and burden during Elizabeth’s rule. Finally, in the year 1829, the Catholic Relief Act was passed relieving the Catholics of the several impositions that were thrust upon them.