Pirate Captains: Blackbeard was British, probably born before 1690. His real name was thought to be Edward Teach. As a young seaman, he had served on a British privateer that was based in Jamaica, an island in the Caribbean. Privateers were privately owned, armed ships hired by governments during a time of war.

In battle, Blackbeard was a savage butcher with almost inhuman strength. He intimidated foes by wrapping slow-burning lighted coils in his long, black hair and beard. Wearing two gun belts across his chest and carrying six pistols into battle, he was an unforgettable enemy. 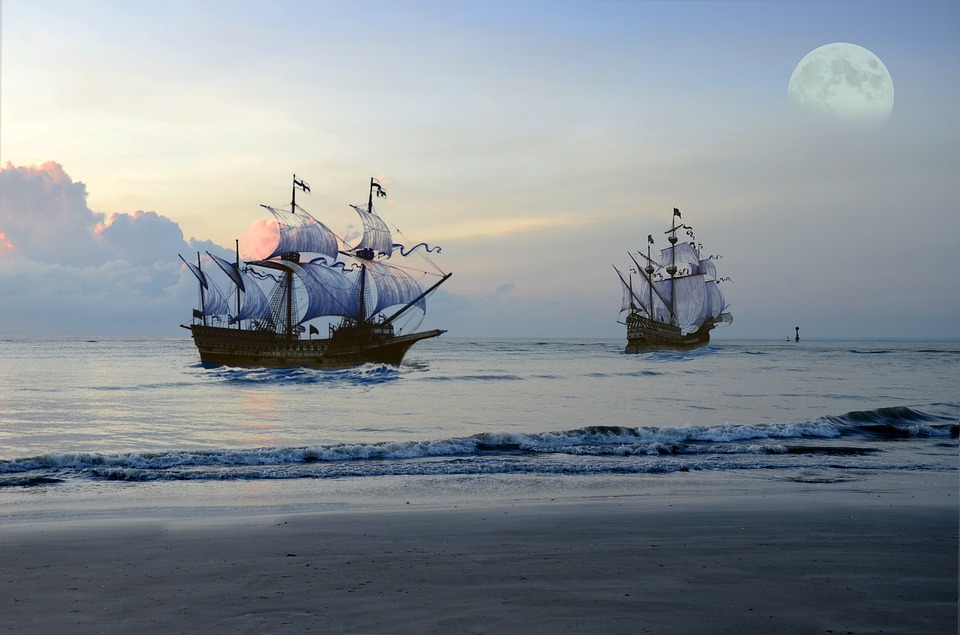 His best-known vessel was his flagship, the Queen Anne’s Revenge, which was festooned with the bones of his victims and spits Greek fire from its bow to incinerate enemy ships or the occasional crewmember fallen out of favor.

Blackbeard’s death marked his passing from man to legend. In death, he has become far more important than he ever was in life. He has come to symbolize all pirates, which in turn have come to symbolize freedom and adventure.

Born John Roberts, Bartholomew Roberts, also known as Bart Roberts, was a Welsh pirate who raided shipping off the Americas and West Africa between 1719 and 1722. He was the most successful pirate of the Golden Age of Piracy, capturing far more ships than some of the best-known pirates of this era such as Blackbeard or Pirate Captains Kidd.

John Rackham, who earned the nickname “Calico Jack” because of his taste for clothes made of brightly-colored Indian Calico cloth, was an up-and-coming pirate during the years when piracy was rampant in the Caribbean and Nassau was the capital of a pirate kingdom of sorts.

The high points of Calico Jack’s short but eventful career can be summarized into just a few words, he first achieved prominence when he deposed Charles Vane as Pirate Captains of the Pirate ship the Treasure, then in 1717 he smuggled Anne Bonny to sea disguised as a man

where the duo was soon joined by a further female Pirate, Mary Read, Calico Jack’s Lieutenant who revealed her true identity in response to advances from Anne Bonny.

Anne Bonny was a headstrong, fiercely independent woman with a vicious temper and legendary courage. She was born in Ireland, out of wedlock to a maid in her father’s home. She married a young soldier, James Bonny, for which she was turned out of her father’s home.

Of all the pirates, Henry Morgan was the most successful. Morgan started out living a proper life in Jamaica and even became a colonel for a famous Governor.

Even though Morgan had a good life, he was not happy and decided to become a pirate! He and his crew attacked a ship called the Puerto Principe and stole over 250 000 pieces of eight, jewels and other goods.

As a young boy, he was sent from Bristol, England to the island of Barbados as an indentured servant. This was a form of white slavery which was widely used at that time. Supposedly indentured servants were to work for approximately seven years and then be granted their freedom to pursue their own careers.

Henry Morgan did not go to sea until sometime between his twentieth and thirtieth birthdays. His early sea exploits have not been chronicled so little is known about this phase of his life. He did have command of his own ship by 1666.