The Pirate Song – the Sea Shanty

The Pirate Song – the Chantyman or Chanter

The words of the Pirate Song

The custom of singing, or chanting, various Pirate Songs was an extremely important part in the life of a pirate. The pirate song was sung, or chanted, to accompany the hard and sometimes tedious tasks that had to be performed as part of the daily tasks of pirates.

A pirate song would have been changed, rather than sung, and the words of the chorus would have accompanied a heave or pull for a task such as raising the anchor on the pirate ship. 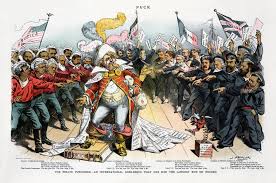 Most shanties are call and response songs, with one voice singing the line and the chorus of sailors bellowing the response. For example the shanty boney.

Long drag or halyard shanties were for work that required more setup time between pulls. It was used for heavy labor that went on for a long time. Capstan shanties were used for long or repetitive tasks that simply need a sustained rhythm.

Stamp n Go shanties were used only on ships with large crews. Many hands would take hold of a ‘tug of war’ style and march away along the deck singing and stamping out the rhythm. Life on a whaler was shorter than any other type of vessel, your life might be shorter on a pirate’s ship, but the work would not be so hard.

Specific types of songs were sung for certain tasks: short-drag shanties accompanied brief but hard jobs such as unfurling the sails. Pumping songs kept a steady rhythm for pumping water out of the bilge hold. Long-drag shanties offered a call-and-response format to energize the men through lengthy, intense tasks, such as hoisting a topsail.

While sea shanties originated on ships of many different countries, they spread throughout the seas. Shanties were used for the hard work aboard ships and sentiments in them were universal. They were not originally in the musical form we find them today but chanted – with the chanter calling out words and the men calling out the chorus in rhythm to their work.

The Pirate Songs words and lyrics

To the mast nail our flag it is dark as the grave,
Or the death which it bears while it sweeps o’er the wave;
Let our deck clear for action, our guns be prepared;
Be the boarding-axe sharpened, the scimetar bared:
Set the canisters ready, and then bring to me,
For the last of my duties, the powder-room key.

It shall never be lowered, the black flag we bear;
If the sea be denied us, we sweep through the air.
Unshared have we left our last victory’s prey;
It is mine to divide it, and yours to obey:
There are shawls that might suit a sultana’s white neck,
And pearls that are fair as the arms they will deck.

There are flasks which, unseal them, the air will disclose
Diametta’s fair summers, the home of the rose.
I claim not a portion: I ask but as mine
‘Tis to drink to our victory – one cup of red wine.
Some fight, ’tis for riches – some fight, ’tis for fame:
The first I despise, and the last is a name.

I fight, ’tis for vengeance. I love to see flow,
At the stroke of my sabre, the life of my foe.
I strike for the memory of long-vanished years;
I only shed blood where another shed tears,
I come, as the lightning comes red from above,
O’er the race that I loathe, to the battle I love.

Some of the Famous pirate Songs are

“The Pirate King” – from The Pirates of Penzance