According to Shakespearean scholar James Shapiro, in Julius Caesar “the various strands of politics, character, inwardness, contemporary events, even Shakespeare’s own reflections on the act of writing, began to infuse each other”. In the early 17th century, Shakespeare wrote the so-called “problem plays” Measure for Measure, Troilus and Cressida, and All’s Well That Ends Well and a number of his best known tragedies.

Many critics believe that Shakespeare’s greatest tragedies represent the peak of his art. The titular hero of one of Shakespeare’s most famous tragedies, Hamlet, has probably been discussed more than any other Shakespearean character, especially for his famous soliloquy “To be or not to be; that is the question”. Unlike the introverted Hamlet, whose fatal flaw is hesitation, the heroes of the tragedies that followed, Othello and King Lear, are undone by hasty errors of judgments.

The plots of Shakespeare’s tragedies often hinge on such fatal errors or flaws, which overturn order and destroy the hero and those he loves. In Othello, the villain Iago stokes Othello’s sexual jealousy to the point where he murders the innocent wife who loves him. In King Lear, the old king commits the tragic error of giving up his powers, initiating the events which lead to the murder of his daughter and the torture and blinding of the Earl of Gloucester.

According to the critic Frank Kermode, “the play offers neither its good characters nor its audience any relief from its cruelty”. In Macbeth, the shortest and most compressed of Shakespeare’s tragedies, uncontrollable ambition incites Macbeth and his wife, Lady Macbeth, to murder the rightful king and usurp the throne, until their own guilt destroys them in turn. 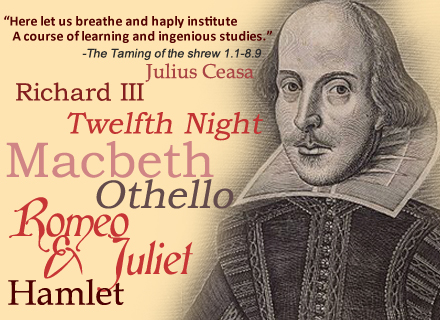 In this play, Shakespeare adds a supernatural element to the tragic structure. His last major tragedies, Antony and Cleopatra and Coriolanus, contain some of Shakespeare’s finest poetry and were considered his most successful tragedies by the poet and critic T. S. Eliot.

In his final period, Shakespeare turned to romance or tragicomedy and completed three more major plays: Cymbeline, The Winter’s Tale and The Tempest, as well as the collaboration, Pericles, Prince of Tyre. Less bleak than the tragedies, these four plays are graver in tone than the comedies of the 1590s, but they end with reconciliation and the forgiveness of potentially tragic errors.

Some commentators have seen this change in mood as evidence of a more serene view of life on Shakespeare’s part, but it may merely reflect the theatrical fashion of the day. Shakespeare collaborated on two further surviving plays, Henry VIII and The Two Noble Kinsmen, probably with John Fletcher.

Influenced by Ovid’s Metamorphoses, the poems show the guilt and moral confusion that result from uncontrolled lust. Both proved popular and were often reprinted during Shakespeare’s lifetime. A third narrative poem, A Lover’s Complaint, in which a young woman laments her seduction by a persuasive suitor, was printed in the first edition of the Sonnets in 1609.

Most scholars now accept that Shakespeare wrote A Lover’s Complaint. Critics consider that its fine qualities are marred by leaden effects. The Phoenix and the Turtle, printed in Robert Chester’s 1601 Love’s Martyr, mourns the deaths of the legendary phoenix and his lover, the faithful turtle dove. In 1599, two early drafts of sonnets 138 and 144 appeared in The Passionate Pilgrim, published under Shakespeare’s name but without his permission

Published in 1609, the Sonnets were the last of Shakespeare’s non-dramatic works to be printed. Scholars are not certain when each of the 154 sonnets was composed, but evidence suggests that Shakespeare wrote sonnets throughout his career for a private readership. Even before the two unauthorised sonnets appeared in The Passionate Pilgrim in 1599, Francis Meres had referred in 1598 to Shakespeare’s “surged Sonnets among his private friends”.

Few analysts believe that the published collection follows Shakespeare’s intended sequence. He seems to have planned two contrasting series: one about uncontrollable lust for a married woman of dark complexion (the “dark lady”), and one about conflicted love for a fair young man (the “fair youth”).

It remains unclear if these figures represent real individuals, or if the authorial “I” who addresses them represents Shakespeare himself, though Wordsworth believed that with the sonnets “Shakespeare unlocked his heart”.

“Shall I compare thee to a summer’s day?

It is not known whether this was written by Shakespeare himself or by the publisher, Thomas Thorpe, whose initials appear at the foot of the dedication page; nor is it known who Mr. W.H. was, despite numerous theories, or whether Shakespeare even authorised the publication. Critics praise the Sonnets as a profound meditation on the nature of love, sexual passion, procreation, death, and time.