The poem “Venus and Adonis” is a narrative poem written by Shakespeare published in the year 1593. It was probably William Shakespeare’s first publication.

Even as the sun with purple-color’d face
Had ta’en his last leave of the weeping morn,
Rose-cheek’d Adonis hied him to the chase;
Hunting he loved, but love he laugh’d to scorn;
Sick-thoughted Venus makes amain unto him,
And like a bold-faced suitor ‘gins to woo him.

Thrice-fairer than myself,’ thus she began,
The field’s chief flower, sweet above compare,
Stain to all nymphs, more lovely than a man,
More white and red than doves or roses are;
Nature that made thee, with herself at strife,
Saith that the world hath ending with thy life. 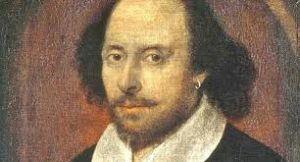 Vouchsafe, thou wonder, to alight thy steed,
And rein his proud head to the saddle-bow;
If thou wilt deign this favour, for thy meed
A thousand honey secrets shalt thou know:
Here come and sit, where never serpent hisses,
And being set, I’ll smother thee with kisses;

The Adonis is probably the most beautiful man in the world,  but unlike many beautiful men, Adonis is completely unaware of the way in which his looks seem to hypnotize the opposite sex. He would rather spend most of his time hunting that with a girl.

And Venus is the goddess of love, and when she sees Adonis for the first time, she falls in love with him (Adonis) and comes down to earth to meet with Adonis. When Venus and Adonis both meet, Adonis is about to set out on a hunt.