The tragedy was one of the genres which were popular in plays during this period. These plays had a dark mood in the drama. Although tragedy plays were written and performed even before the Jacobean period, it was during the reign of King James I that tragedy plays actually developed.

In a typical tragedy, the protagonist or the lead character suffers an emotional loss like death of a person he/she loved or betrayal. The protagonist then seeks to avenge the loss. This type of tragedy was also known as Revenge Tragedy and was extremely popular in the Jacobean era. 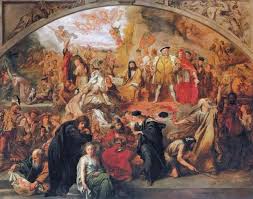 Finest examples of revenge tragedy were ‘The Spanish Tragedy’ by Thomas Kyd and ‘Hamlet’ by William Shakespeare. Other famous revenge tragedies included plays like ‘The White Devil’, ‘Tis Pity She’s a Whore’ and ‘The Challenging’.

Another kind of tragedy plays written during this period were known as ‘Tragicomedy’. In this type of a play, both elements like tragedy and comedy were included. One of the best examples of this type of plays was ‘The Winter’s Tale’.

Of the many playwrights of that time, William Shakespeare and Thomas Middleton can be said to be the playwrights who were successful not only in writing comedy, but also tragedy.