What Three Tribes Made up the Anglo-Saxons?

The Angles, Saxons, and the Jutes were the three main powerful Germanic tribes who invaded Britain in the 5th century and formed Anglo-Saxon England.

Where did the Anglo-Saxon tribes come from?

The Anglo-Saxon race was a mix of Germanic tribes from the Northern coastlines of Germany, Denmark, and the Netherlands. There are different theories related to the Anglo-Saxon migration to England.

In 500 AD a British scholar named Gildas accounted for horrific events that took place after the Romans left England. He recalls how the Anglo-Saxons looted and vandalized England and how many Britons were killed and exiled from their own homeland.

Another theory was established much later in 731 AD by Venerable Bede, an Anglo-Saxon monk of the monastery of Jarrow. He stated that it was during 449 AD that his ancestors the Anglo-Saxons came to Britain and invaded the lands. He further added that it was an ‘Act of God’ or divine vengeance against the chosen people of Britain.

According to Bede, the Angles came from Angeln, Northern Germany, the Saxons from Lower Germany, and the Jutes from Jutland or present-day Denmark.

In the Southwest United States, the word “Anglo” is used to denote non-Hispanic white people, which means the European Americans.

Why did the Anglo-Saxons invade Britain?

There are several opinions among historians as to why the Anglo-Saxons may have invaded Britain. Some people think that they were invited to Britain to save the land from attacks from Scotland and Ireland.

The Angles derived from the Latin word ‘Anglii’ meaning ‘narrow waters’ in Germany was first recorded in Tacitus’s ‘Germania’ in 98 AD. Another meaning of the word was ‘fishing hook’ which suggests that fishing must have been the main occupation of the Anglo tribe.

According to Tacitus, the Angles were the first Germanic tribes that came to Britain. They belonged to the Suevi group of tribes who worshipped ‘Nerthus’ or Mother Earth.

Bede writes in his book the “Ecclesiastical History of the English People” about how the heathen Angels would celebrate their New Year by worshipping their Ancestral Mother. Apart from Mother Earth some of the other Nordic deities they worshipped were the Wodan, Thonar, and Thor.

The exact location of their territories was unknown. It was believed that they lived in the Jutland peninsula near the Baltic sea which was covered with forests, swamps, rivers, and marshes quite inaccessible for foreign attacks. The Eudoses or Jutes were their neighbours.

During the 2nd century, huge tidal waves of tsunami forced the Anglo-Jute tribes to migrate their lands. By 5th century Scandinavia mainly parts of Norway and Denmark has become much cooler which was one of the reasons that forced the Anglo-Saxons to abandon their lands in search of food and more favourable weather.

The Angles introduced their native language ‘Englisc’ which later developed into the Old English and was even used by the Saxons.

‘Saxon’ meaning – a dagger or a short sword.

The Saxons were an old Germanic tribe that lived along with the Franks in the Northern Sea coast of Netherlands, Germany, and Denmark. They derived their name from the Old English word ‘Seax’ meaning knife.

Gildas, a 6th-century British monk described the Saxons as savages who killed and rampaged the lands of Britons like wild animals.

The Saxons were illiterate barbaric tribes who later joined hands with the Frankish people and raided the coastlines of Gaul and Britain.

In 410 CE, the Roman had withdrawn their forces from Britain. It was during this time that the Saxon tribe arrived in Britain and by 800 CE, the Saxon pirates have occupied a major portion of the Northern parts of Europe including the Baltic coast. Most of the Saxons territories could be identified with the suffix ‘sex’ like Wessex, Essex, and Sussex. The Saxons used an old Germanic dialect much similar to the Frisian language.

In 772 CE, the Saxons came into conflict with the Franks. The Frankish ruler Charlemagne tried to convert the Saxons into Christianity. The war lasted for 33 years. The outcome of the war was quite brutal and costed the lives of 4500 Saxon prisoners. Eventually, the Saxons submitted to the Carolingian dynasty of the Franks.

According to Bede, the Jutes were among the three powerful Nordic tribes that settled in Britain. The Jutes were primarily from Jutland Peninsula including parts of Denmark, Schleswig in Germany, and Frisian coast. They invaded Britain during the 5th century and settled in Kent, Isle of Wight, and some parts of Hampshire.

The Jutes introduced the system of partible inheritance called Gavelkind which was prevalent in Kent and parts of Ireland and Wales. It was later abolished after the Norman Conquest in 1066.

The dialect that the Jutes spoke is unknown but they used the traditional German Runic alphabets.

What language did the Anglo-Saxons speak?

The language spoken by the Anglo-Saxons is now known as Old English. It is the precursor of modern-day English. It was close to other Germanic languages such as Old Norse, Old Friesian and Old High German.

What were the 7 Anglo-Saxon kingdoms?

The seven Anglo-Saxon kingdoms were Northumbria, Mercia, East Anglia, Essex, Kent, Sussex and Wessex. The term used to denote the period of Anglo-Saxon establishment in England was Heptarchy, meaning “seven” and “rule”.

Anglo Saxon Culture Religion – The Anglo-Saxons were pagan people, but with the passage of time, they converted to Christianity. The aspects of their Pagan culture also remained in them and therefore, many of the customs seen in Britain today actually originated from pagan festivals.

What was the Anglo-Saxon population?

According to certain sources, the population of the Anglo-Saxon migration was 10,000 to 20,000. Although, previous estimations based on archaeological data stated that the population was much higher, somewhere around 100,000 people. 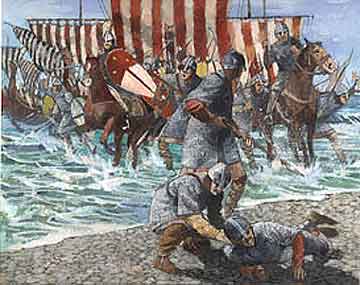