The Nobleman from Portugal, Bartholomeu Dias was born in the year 1451 and made history with his successful expeditions. He was known for being an able explorer and is best remembered for being the first among Europeans to have sailed around the tip of the continent of Africa in the year 1488.

His name still shines brightly in the pages of history books for the magnitude of his achievements that brought innumerable benefits to his future generations!

Dias was chosen as the leader of the expedition that aimed at finding a way to reach the Indian subcontinent through the sea and tried to locate this route by sailing around the tip to the south of Africa.

The main aim behind this voyage was to discover a way to reach India by sea so that trade relations could be established with the Asian country that was rich in spices which were valuable and scarce.

Moreover, Dias was also instructed to revive good relations with those countries that were important to Portugal’s financial future and hence the latter wanted to establish friendly terms with them.

Finally, he was in search of those lands which were believed to be ruled by Africa’s prince who was said to be a Christian priest as well and had been made famous by various fables. Thus he was on a mission that had multiple aims!

The journey of Bartholomeu Dias began in 1487’s August. He sailed through the land of Angola and arrived at the Walvis Bay in December. He then crossed the Cape of Good Hope and reached the Saint Blaise Bay by February next year.

By 12th march of 1488, Dias and his men arrived at Waaihoek and constructed a Padrao at that place to mark the last point of their expedition. Unfortunately, though Dias had the intention of sailing up to the Indian subcontinent, 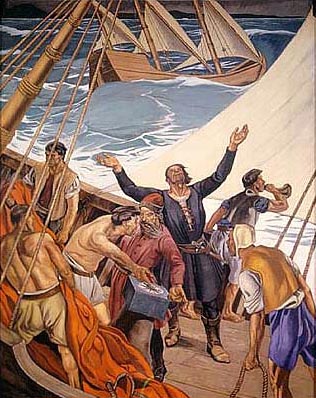 the reluctance of his men compelled him to start sailing back home. It was at this point of time that Bartholomeu Dias discovered the famous Cape of Good Hope in 1488 May.

He finally returned to Lisbon after his successful expedition by December of 1488. Vasco da Gama made use of the discovery of Dias during his journey to India. In fact, Bartholomeu Dias himself was part of that expedition till the islands of Cape Verde.

He died when they were nearing the Cape of Good Hope which he used to refer to as the Cape of Storms. It was ironically a storm that killed Dias and the others in his ship at this spot on the 29th of May, 1500.

His discovery helped many explorers in the future and helped find the necessary connecting sea route between the east and the West. A lot of the world history that we know today would have been impossible without this discovery. This is what makes Bartholomeu Dias’ contribution to European history especially important.