Bess of Hardwick was known for her expertise in needle work. She had arranged for many visits from Mary the Queen of Scots. These visits often extended up to long stays and they were organised at the Chatsworth house where they worked on the Oxburgh hangings. 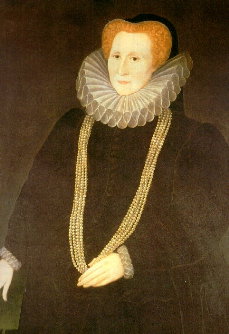 During 1601 Bess had prepared an itemised list of all her furnishings and embroidered textiles which were the finest examples of her craftsmanship and her greatest property. She included this list in her will and left it to her heirs and coming generation for the future.

This collection of the finest specimen of tapestries, wall hangings and embroidered textiles are still preserved, even after 400 years, in the Hardwick hall textiles.

Bess had a somewhat full and interesting life. She was married three times before she married the Earl of Shrewsbury. In fact she was just 14 at the time of her first marriage and this marriage was never consummated before her husband died. She had many children from all her marriages but she had an amiable relation with all her children, even adopted ones of her former husbands’.

By her third marriage she was a very wealthy lady and only thirty years old. Her youth and good looks still remained and this made her a very popular suit for marriage.

She ended up marrying Shrewsbury on the Queen’s suggestion. She and her husband also had a close acquaintance with Mary the Queen of Scots. However, this marriage also ended with the death of her husband and this made her the dowager Countess of Shrewsbury.

Bess of Hardwick was specifically known for her skills and acumen with buildings. She was known for her superb designing of majorly two buildings – The Hardwick hall and The Chatsworth. She has also been glorified in a memorial in the Derby cathedral.

Bess of Hardwick has also been prominently displayed in countless fiction works as one of the chief characters. Some of the most important such works are: The Other queen by Phillipa Gregory, The Woman of Passion by Virginia Henley.

More Info On- Mary I Queen of Scots, Elizabeth Bathory