Weapons were of great importance in the Elizabethan Era under the reign of Elizabeth I (Virgin Queen). During that time England suffered the constant threat of war from the other superpowers of the time like Spain and France. The army of Elizabethan era employed the weapons that were modern and innovative. The weapons which were needed to win the war were included in the troop.

The problem in the medieval period weapons used at during time was that they were still used and wielded by trained military men. Hence there was an extreme necessity for the immediate advancement of Elizabethan era weapons.

Hence in the Elizabethan Era, many new weapons were innovated. The old weapons were modified to make them more advanced and some of the weapons were made to be disappeared as per the need of the war and the strong enemies. This Elizabethan era weapons not only changed the lives of the people of 16th and 17th century, but it made a great impact in the revolution of the futuristic weapons.

As for illustration swords in the Elizabethan Era were used in striking as well as thrusting motion. Following that tradition Swords are also used in the same manner in the modern world. However many other weapons like arrow, bows, firearms were also used as the Elizabethan Weapons other than swords.

Unlike that of medieval age systems, the nobles are not required to provide trained soldiers, food, clothes or weapons in the Elizabethan Era. Weapons were upgraded with the change in the technology and this helped the soldiers greatly during the wartime.

During the early years of the Elizabethan era, swords were the choice in weaponry. Soldiers were required to learn to fence with different kinds of swords that included broadswords, cutting swords, and the rapiers. After the training, the same things were used even in the war.

The most common weapons used in the Elizabethan era were battle axe, rapier, dagger, mace, lance, basilard, arbalest, billhook, bill, caltrop, spear, crossbow, longbow, pike, poleaxe, polehammer, polearm, musket, cannons, bows and arrows, and halberd. These weapons were usually made of metal and wood. Some of the most widely used Elizabethan Weapons were

One of the most deadliest weapons of the Elizabethan Weapon was the Rapier. The rapier was the favorite among the swords that were in practice. Although the sword was wider, it was, slender, and more sharply pointed. Hence trained soldiers preferred rapier the most.

Rapier was used for both thrusting and cutting attacks. The length of the sword varied from 30 to 72 inches.

A short knife with pointed blades that were used to pierce, thrust or to stab a weapon having short and single edge blade. Generally, daggers were used in close combat as the secondary weapon for defense.

The soldiers were provided with this broadsword during the wartime. It is basically a wide blade with two lethal sharp edges that is used widely for cutting than thrusting. However, there was not a very effective weapon due to its short reach.

They were mostly used by the Foot soldiers and sometimes by Knights. Axe was mostly used for close combat as it required less precision.

It is a long spear that measures itself from 18 to  20 feet.

The short bow and arrow were the most commonly used weapon in the Elizabethan Era. They were very easy to use and cheap to make.

The Bows were made in two parts. One part of which is a flexible strip made up of wood mostly that would be linked with the cords at the two ends to form a tension for propelling row. The second part is the string usually made up of hemp, the strongest fiber of that time. It was then dipped into the glue to make it resistant from moisture.

The arrows look like a straight shaft. It has a sharp point on one of its end and feather at its other end. The first type of arrows that were used were broadhead arrows.

The crossbow is also known as the arbalest which has higher firing range than longbows approximately 350-400  yards. However, its main disadvantage was that they can be fired only once or twice per minute and so it requires a lot of time to reload again.

Later, Queen Elizabeth, I  ordered to replace the crossbows with one of the most advanced weapons in her reign: the musket. The musket was created in the 1520s but until the 1590s they were not officially used by men in the battle Thus it made firearms the new Elizabethan era weapons which changed the face of England’s weaponry forever.

In the Elizabethan Era most commonly used weapons were firearms that included cannon and muskets. Previously used musket used the mechanism of matchlock which was too inaccurate, expensive and very slow to load. Muskets took a long time to load and to fire and hence were found to be inaccurate for long range shooting of over 100 meters Still, the musket remained an indispensable weapon since it was introduced and throughout the rest of the era.

However, Musket that was invented using flintlocks towards the end of 1500 came to be as one of the revolutionary weapons that replaced the bows. The cannons were also invented around the same time and they replaced heavy artillery like ballista and trebuchet. Cannons were generally made up of iron, bronze and fired stone.

Many other weapons other than crossbow from the medieval age were replaced by modern Elizabethan weapons. The trebuchet, ballista, and the mangonel were replaced by the canon, with the round shots made of iron or stone balls. However, the cannons proved to be the most useful replaced weapons as they can be used both on land and sea. 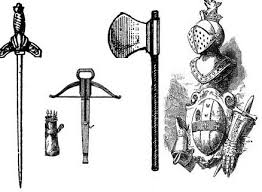 The Elizabethan era has always been referred to as the Golden Age. It was the time when England reportedly proved successful in all its endeavors that also included its military expeditions and conquests. The superiority of English warfare and the weapons used during the war always proved themselves over time. This added to England’s supremacy as a nation.