Bull Inn Theatre: There is a specific relation between the two. The period of time between 1558 to 1603 is popularly referred to as the Elizabethan era, it was a time in the English history when art and literature flourished and it is precisely for this reason that it is also known as the ‘golden age’.

William Shakespeare was among the many playwrights who produced some of the greatest works of art in the form of theatre. Elizabethan theatre prospered during this period and they were mostly enacted in different types of venues, the most common being popular in yards.

The Elizabethan theatre troupes would travel throughout the country giving performances at various locations and would settle in taverns or inns. They then negotiated a deal with the owners of the inn so that they could perform their plays there. 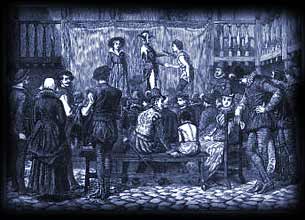 The ideal venue for them to stage their plays were the yards made out of cobblestone which was inevitably present in all the inns because then the only means of transportation of the people was riding on horseback.

They were later regulated and made into fully commercial venues for the troupes to perform. The Bull Inn Theatre was one of the most renowned inns for the performance of the Elizabethan plays which functioned before the amphitheaters and modern-day theatres Elizabethan play and playhouses came into existence.

It was located at the bishop gate in London and it was in use during the period from 1576 to the year 1594 before activities of the theatre were regularized. The troupes who would come to stay in one of these inns while traveling from one place to the other giving performances would have to talk the owner of these inns into letting them stage a play in its yard.

The people who came to watch would have to pay a nominal amount if they would be present in the yard itself and a slightly higher price if they wanted to get a better view and preferred to be in the balconies.

After a few years, these an entrepreneur by the name of James Burbage regulated the inn yard plays and eventually built a theatre which ten gave way to the development of many different theatres and the inn yard plays gradually disappeared from sight and so did the bull in. Thus in Elizabeth era, bull in Theatre was very famous.