I do not know about you, but I like having the variety of beverages that I have today. While I still drink plenty of water, I probably drink two or three different forms of beverages in a single day. The Elizabethan people were not so lucky. Generally water was not considered to be clean during this time and therefore people avoided drinking it. So instead, you pretty well only had two choices, ale and wine.

They would often take the bitter-tasting Ale or beer and add other spices such as berries and peppers to give it a different taste. The upper class had a little bit more privilege by also adding wines to their diets. These wines were frequently imported from other places so it is likely to have had a wide variety of choices to pick from. 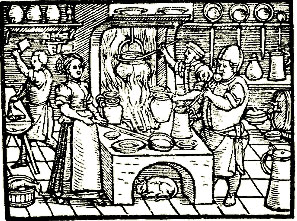 There probably were not nearly as many choices of wine as there are today, but I suspect there was more than just a single importer. There was also a little bit of wine developed from the vineyards in England itself. This was very limited though.
As far as how much the Elizabethans drank, they would perhaps be considered drunkards by today’s standards.

On average it is thought that most Elizabethans probably drank up to a gallon per day of these beverages. Since this was the only things to drink during this time, their system was probably used to receiving this kind of treatment. They certainly were not closet drinkers, that is for sure.

More Info On- Recipes in england during the Elizabethan Era