The colour Yellow had a special significance in European history. It was governed by the English Laws, which dictated the choice of colours, fabric, extravagance and even luxury to regulate the personal habits and to put a restraint on the social and moral behaviours of people living in the society.

The colours worn in the Elizabethan Era resembled the status symbol, profession, as well as the political and religious views of people in the society. People wearing the colour purple were associated with royalty. Colours like gold, silver, crimson, and pure white or even black were worn by aristocrats and noble families. Those were the colours of the upper class.

There were separate laws and proclamations regarding the choice of colours, materials, and designs of dresses that people wore in those times. The 1597 Proclamation regarding dress codes set out certain rules regarding colours and excess of apparel by Queen Elizabeth I.

The colour yellow was commonly worn by the people from the lower class. They comprised the peasants, market-people, servants, beggars and the poor people of the society. The colour yellow became very popular in this section of the population as it was very cheap and could easily be obtained from natural plant extracts. It was also a symbol of hope and a new beginning.

Yellow as a Christian Colour

What does yellow mean in the Bible?

In Christianity yellow is often related to light and purity. During Easters, it is often used along with white. Yellow also represented youth, hospitality, and new harvest and was considered as an act of benevolence. But, pale yellow or off-white colour is considered to be the colour of indignity and humiliation.

Yellow as the colour of peasants

The yellow dye was easily available from plant extracts so it was commonly used among peasants. There were a variety of dye plants and numerous stores that sold these colours. Most of the yellow colours were cheap except the neon yellows which were considerably costly.

Yellow being an earthy and natural colour was preferred by most especially by people of the working class. Yellow mixed with gentle white or cream were worn by maids and peasant women who worked in households and fields and the colour blended easily with other colours of their dresses.

The Yellow Badges of Jews

During The reign of King Edward I in medieval Europe, the Jews were hated among all and were ordered to wear Yellow Badges or Jewish Badges in public. They were considered a threat to society and Christianity and made to wear these badges as “badges of shame”.

These badges were in the shape of a yellow star that was worn on the headgear and on the neck. The badges were pale yellow in colour and the colours were extracted from weld seeds and it was very cheap. The main idea was to defame and identify the Jews in public.

The yellow colour was often used for mourning. It was often allied with treachery and greed.

Dyes used for the colour yellow 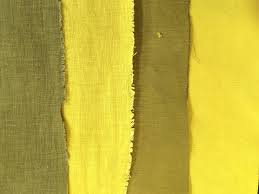 Peasants could not afford to buy expensive dyes available in the markets, so they dyed their own clothing with natural colours of the plants available in the garden and countryside. Dye plants such as golden marguerite and calendula were used to extract yellow colours.

Weld seeds (Reseda luteola) commonly known as “dyer’s rocket” or “dyer’s broom” was used to obtain a pale yellow colour. These dyes produced different shades of yellow from lemon-yellow, orange-gold to yellow-green and were used both for the lower and as well as the upper class.

The fabrics were heated in the dye to produce the desired hue of yellow. Other components such as wines, salts, mosses, flowers, berries, roots, etc were also added during the process.