Crewelwork is a very old form of stitching. In fact, it is a type of free embroidery in which wool was used. Crewelwork involved the use of various types of stitches. Crewelwork was done with the help of pointed crotchets. This form of work is regarded to be a very difficult form of embroidery.

What is Jacobean Crewel work?

Crewelwork is a type of embroidery mainly used for furnishing. They are characterized by plants, flower and animal shapes. They were done with two-ply wool or linen.

In Jacobean times, they were used for curtains, bed-hanging. They had rich designs featuring trees, forests and landscapes with birds and animals. Jacobean crewel work resulted from the earlier form of wool embroidery. In the 16th and 17th century, large houses with grand architecture were being built. They required elaborate furniture, cushions, curtains etc.

These articles were decorated with crewel embroidery. Colours such as rich blue, dark shades of indigo and bright green were used. There was also occasional use of subtle colours like pink, bronze-green and yellow.

Jacobean crewel work included various designs. Birds, animals, flowers, plants, Tree of Life were some of the commonly used designs for crewelwork. Although crewelwork per se had been in existence for many years prior to the Jacobean period, it was during the reign of King James I that crewelwork was perfected and it reached its pinnacle in the 17th century. 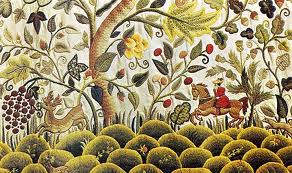 Crewel work was essentially done by women during their spare time. These women through years of practice had become the masters of this art. Crewel work was done curtains, pillows or even bed hangings.

The outlines were made using rope stitch, coral stitch and chain stitch.

The oldest crewel work that had survived is the Bayeux Tapestry that depicts the Norman conquest. The main characters in the design were stitched using laid stitches, outlines were made with crouching and stem stitch for details. Contrary to the name, the Bayeux Tapestry is not a tapestry, instead, it is an embroidery.