Where was Panfilo De Narvaez Born

In Castile in 1478, was born the famous conqueror and soldier of Spanish origin, Panfilo de Narvaez. He was a duke and had fought many battles in the Americas. He belonged to an accomplished family and was well known in Spain for his conquests and as a brave and able soldier.

He is best remembered for the Narvaez Expedition that went in search for wealth and to make colonies out of Florida and the Gulf Coast, but ended in a complete disaster. In 1509, Panfilo de Narvaez participated in the Jamaican conquest and later in 1512 he was also an important part of the Cuban conquest. 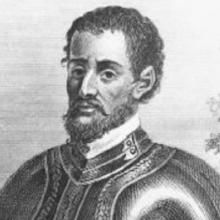 He was an active part of many expeditions in eastern Cuba together with Grijalva and Casas. He was made Florida’s Governor under the reign of Charles V. However, he is mostly known as the leader of the infamous Narvaez Expedition that killed all its men except four who survived the tragedy.

He set sail with his men and started the Narvaez Expedition on the 17th of June, 1527. However, they were all badly affected due to the adverse effects of the stormy weather which they had to face at sea. By the time they reached Florida in 1528, they were exhausted and the storm had taken its toll on Narvaez’s men and boats.

When Narvaez landed in the famous “Jungle Prada Site” in Riodelas Palmas only around 350 out of his 600 men had survived the adverse conditions. Here he and his fleet were greeted into a situation filled with hostility.

As he advanced towards the interiors of the land his men were faced by the ferocious and able Apalachees who were far stronger and easily intimidated the explorer and his men. By this time Narvaez himself had lost hope and his strength of mind. His lack of determination prompted his loss of focus on the expedition.

Despaired by the failure of the fleet to find the wealth and the riches that they were looking for, he felt that the goal that they had set out to achieve was an impossible one. Taking into account the condition of his men and the adverse situations that they had fallen prey to, Narvaez ordered his men to retreat into the sea and begin to progress towards Mexico. But things refused to work his way.

A terrible storm struck the fleet and destroyed all the boats, killing Narvaez and almost all his men! There were only four survivors who made it back to Spain after years of difficult struggle. Vaca’s narrative about the journey of these four survivors in the form of the “Castaways”, gave an account of their struggles through the next eight years before they could reach their homeland.

Without a doubt Panfilo de Narvaez’s grand Narvaez Expedition failed miserably and cost many lives. However, the man who himself died centuries back in 1528, still remains alive in the pages of history whether for his brave battles and commendable conquests or for his lack of judgment and wrong decisions during the Narvaez Expedition.