Tudors carried out all of their transactions in coins, as at the time there was no form of paper money in existence at all. While the coins that were minted contained either gold or silver, the valuable metal was always mixed with one of a lesser value, as this made the valuable metals go further. The value of a specific coin was linked to the amount of either precious metal that they contained.

Pounds and pence are still in use in England today, however the shilling was retired in 1971 when the country introduced decimalisation. Unlike today where a pound contains one hundred pennies, during the Tudor period there were 240 pennies in every pound.

The half penny, was literally half of a penny as prior to halfpenny coins being minted, a penny could be cut in half. The same applied to the farthing which was a quarter of a penny. The way that money was written in England during the Tudor period used Latin and Roman symbols. Pennies were expressed as ‘d’ which comes from the Roman denarius silver coin.

It is doubtful if many of the population ever got to see a fine sovereign in their life time. The smallest coin of Tudor currency was the Farthing (¼ penny), there was also a Threefarthing (¾ penny) as well as a Half Groat (2d) and a Crown (60d/5s).

One thing that has not changed since the time of the Tudors, is the way that one job pays more than another. While the noble classes could expect to deal in angels, pounds and fine sovereigns, the poor working classes would have traded with pennies and smaller coins of the realm. A common labourer could expect to earn in the region of £5 – £10 per year, providing that he was consistently employed. 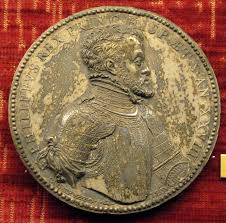 A more skilled worker such as a carpenter could earn a little more at around £13 per year. A parson in a church could expect wages in the region of £20 per year. A merchant with good and regular trade would earn more than a poor man could expect to earn in a decade, with an average yearly wage of £100. Though at the very top of the scale with an annual wage of between £1500 – £3000 per year was the nobleman.

How much is a Tudor Pound worth Today?