Mary I Queen of Scots was born on 8th December 1542 to King James V of Scotland and his French wife Mary of Guise at Linlithgow Palace, Scotland. She was the only child of the King to survive. It is said that Mary I was born as a premature. She was barely a week old when her father, King James V died and after nine months, she was crowned as the next ruler of Scotland.

Since she was very small when she became the Queen, the ruling power was designated in the hands of regents till Mary would reach adulthood. It is said that Mary had a small well-shaped head, long neck, auburn hair, hazel-brown eyes. These features made her look very pretty in her childhood and an attractive woman in the later phases of her life.

In 1543, the Treaty of Greenwich was signed by virtue of which Mary would be married to Edward, son of King Henry VIII of England. This marriage did not materialize as planned because of the Cardinal Beaton rising to power again and changing the perception of Scottish people towards the English.

Mary and her mother shifted to Stirling Castle when there was a threat of French ships approaching the Scottish coast. It was in this castle that on 9th September 1543 Mary has crowned the Queen of Scots. 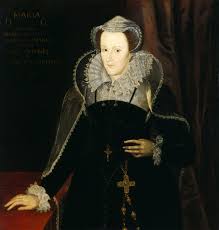 After the coronation ceremony, a few members of Scottish ships were sent for France but were arrested en route by Henry VIII stating that they were not allowed to have any sort of trade with the French.

This arrest caused a lot of anger among the Scottish people. The situation went so out of control that the Treaty of Greenwich was rejected by Parliament. On 10th September 1547, the Scots had to face a humiliating defeat at the Battle of Pinkie Cleugh. This day was also known as ‘Black Saturday’.

After the battle, Scotland was left devastated. The new French King Henry II came to the rescue of the Scots. He wanted the unification of Scotland and France by marrying little Mary to his three-year-old son, Dauphin Francois. Mary’s mother feeling that this would end all her worries agreed to the proposal and Mary was moved to the Dumbarton Castle.

In 1558, Mary married Dauphin who, in 1559 ascended the French throne as Francis II. During her stay at the French court, Mary had a gained command over languages like French, Latin, Greek, Spanish, Italian, and her native Scots. However, within two years of their marriage, her husband died and Mary returned to Scotland.

After some years, Mary married Henry Stuart, Lord Darnley, her first cousin. In 1566, Mary had a son named James from this marriage who later on became the King of England after Elizabeth’s death. This marriage also ended sadly in 1567 with Henry Stuart’s death.

After the death of Lord Darnley, Mary married James Hepburn, 4th Earl of Bothwell. It was believed that he had killed Darnley. As a result of this, there was a revolt against them, followed by imprisonment of Mary in Loch Leven Castle. Post her failure to regain her throne, Mary turned for help to Elizabeth.

However, knowing the danger Mary had brought with her, Elizabeth ordered her arrest. Mary was shifted to Bolton Castle in 1568 under the care of Henry, 9th Lord Scrope for a year and in 1569, she was again shifted to Tutbury Castle.

During her imprisonment, Elizabeth had ordered a probe into the involvement of Mary in the death of Darnley. At the time of trial, ‘ Casket letters’ were produced as evidence stating the fact that Mary had written those to Bothwell and plotted the murder.

The authenticity of these letters has been a topic for debate for many years. Mary in her defense stated that her handwriting was very easy to copy and that those were written by some other person.

There was nothing much to prove that Mary was a party in the murder plot. After the trial, she continued to stay in her prison. A few months after her imprisonment, Mary was considered to liability by Elizabeth.

Facts About Mary I Queen of Scots

Mary was charged with treason after being falsely accused in the Babington Plot by her own letters. These letters had been arranged by Sir Francis Walsingham to be delivered to him. It was very apparent through these letters that there was a consent given by Mary to plot and kill Elizabeth. Mary, however, refused to accept the charges levied on her and defended herself.

During the trial, she pointed out to the court that she had not been given an opportunity to review the evidence or even take a look at the papers taken from her. She contested that she was refused any help from a legal counsel and the fact that she was never an English subject, could not be convicted on the grounds for treason.

However, the court found Mary guilty of the charges and was ordered to be beheaded. Elizabeth was hesitant to grant the order for executing Mary as she felt a strong possibility that Mary’s son James to avenge his mother’s death. Ultimately, Elizabeth did sign the order and handed it to William Davison, a privy councilor.

The privy council took the decision of executing Mary without Elizabeth’s knowledge. It is said that Elizabeth after coming to know of the execution argued that Davison had manipulated her about the facts and thus wrongfully obtained the consent.

She also stated that had she been aware of the contents of the letter, she would not have signed it. He was later on imprisoned at the Tower but was released after the payment of a fine. All this had completely destroyed his career.

Mary, who had been imprisoned at Fotheringhay Castle, Northamptonshire in 1587 was informed before her execution that she would be beheaded the next day. Mary during the last few hours of her life prayed to God, wrote letters and made will by virtue of which she distributed some valuables amongst her servants who had been faithful to her and retired at about two in the morning.

Mary was remarkably calm in front of thousands of spectators gathered to see her execution. Mary said her final prayers which included prayers for her son and even Elizabeth. She also consoled her friends and servants who were grieving her loss. Mary was blindfolded and her neck was placed upon the block.

It is believed that it took at least two or three attempts for the executioner to behead Mary as the first blow being unsteady hit the back of Mary’s head. After the first blow, Mary is said to have said “Sweet Jesus”.

The second blow was accurately placed, thus separating her head from the body. It is believed that when the executioner lifted Mary’s head, her wig came out, revealing her short grey hair. Mary loved animals and she even had a pet dog who is believed to have refused to move from the side of his master’s body for quite some time.

How did Mary Queen of Scots Die

He was eventually taken away by one of Mary’s servants and is said to have died after a few days. After her death, the Catholic nations regarded Mary as a Martyn. Henri III of France, her former brother-in-law held a funeral mass at Notre-Dame, the place where Mary had married Francis.

Mary’s popularity received a setback when it was known that she had married King Philip of Spain. It was during this time that Mary was executed and Philip plotted to invade England which gave rise to the Spanish Armada. However, after Elizabeth’s death, it was James, Mary’s son who ascended the throne.