Interesting Facts about the Tudor and Henry VIII Navy: Until Henry VIII came to the throne there was not really an English navy as such. In times of war, merchant vessels would be fitted out with guns and sent to fight for their king and country.

Henry knew that as an island country, England needed defending from attacks from the sea, and he described the need for an ‘army of the sea’ to defend the English Coast. In order to allow for the construction of this new waterborne army, he arranged for the building of two new Royal shipyards at Woolwich and Deptford.

Some Interesting Facts about the Tudor and Henry VIII Navy

The Royal Navy in Tudor Times

Regarded as the ‘Father of the English Navy’ Henry VIII is responsible for the birth of the Royal Navy. At the start of his reign there were only five official naval ships, but by the end of his reign, there were around sixty, equipped and ready to defend the English coast.

Tudor galleons were large and impressive with many decks, large sails, and many cannon ports. However, there had been little change in the design of ships for some time. 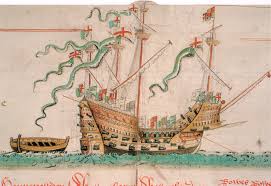 Henry knew that the design of the vessels needed updating if they were to not only compete but conquer the maritime forces of other countries. He saw that two new ships were built to an entirely new design. One of these being his very own flagship “The Mary Rose”. She was constructed between 1509-1511 and was the first true English gunship of the royal fleet.

The Elizabethan Ships of the Royal Navy

While Henry VIII had built up the Royal Navy, none of his immediate successors has seen fit to add to it in any great way. When the Spanish Armada invaded, the English could only muster thirty-six ships to go up against the one hundred and thirty from Spain.

Much of the shortfall in vessels was made up by merchants and a private gentleman who fitted out their ships to go to war at their own expense.

All of the vessels sent out by Elizabeth were smaller than the Spanish ships, which were amongst the biggest in the world at that time. Luckily, what the smaller ships lacked in size they made up for in speed and maneuverability. They managed to defeat the Spanish invasion with less than half of the guns and tonnage of their adversaries.

The decline of the Tudor Navy

For all of the work that Henry VIII had put into defending his country from invasion by sea, Henry VIII ships and his coastal fortresses, which had defended the country from French invasion during his reign, were not pushed forward by his successors. Both Edward VI and his sister Mary (Bloody Mary) allowed the fleet to decline. 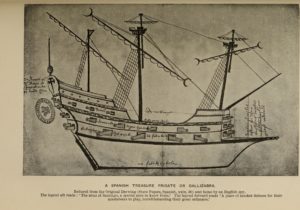 Queen Elizabeth did increase the number of ships in the fleet at the start of her reign, but the fleet was nowhere near as strong as it should have been when Philip launched his armada towards England. Today the Royal Navy is still widely regarded as being one of the best in the world, and it owes its thanks to the foresight of Henry VIII.