There are several suits of armour which were worn by Henry VIII on display around England. The armouries at Leeds and Greenwich as well Windsor Castle and the Tower of London all have items of his and his horse’s armour on show. By looking at the different suits of armour from the different years of his reign it is plain to see how the King, an athletic eighteen year old when he took to the throne became an obese and heavy older man as his reign progressed.

The thing about armour is that it is made to measure. It has to fit to the body quite closely while still allowing for as full a range of movement as possible. The suits were incredibly well made, with some, especially those for tournaments being ornately decorated and engraved. Armour was not only for the battlefield, as without a suit of armour a competitor could well die during a joust or other tournament event. 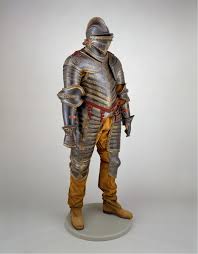 The armour that was made for Henry when he was twenty three years old, gives you a good idea of just how strong and athletic a physique the young king had. This suit of field armour was made to measure the 6ft 1in Henry and has a 34.7 inch waist and a 41.7 inch chest. Just viewing the suit gives you an idea of how he must have looked at the time.

The Field of Cloth and Gold

In 1520 Henry travelled to northern France to take part in a grant tournament held by the Francis I, the King of France. They met for the tournament at the Field of Cloth and Gold. The aim of their meeting was to forge a friendship which meant that England and France could be allies rather than enemies. The tournament was held over eleven days and as both kings were using the event as a way to display their wealth and power, new suits of armour were commissioned for the occasion.

While the kings were never meant to face each other during the tournament, instead being shown side by side at the events, Henry broke the rules by challenging the French king to a wrestling match, which he subsequently lost. At this time Henry was twenty eight years old, his suit of armour made for the occasion shows that his waist had increased to 36.1 inches.

Another suit of armour, this time made for foot combat shows that he went through a massive increase in weight that year as the waist measures 37.9 inches with the chest measuring 44 inches. This suit in itself weight 94lb (42.7kg). The armour that was commissioned for this event was so intricately made that NASA studied its construction in the 1960’s when they were designing the very first space suits.

While the armour that you see on display is all silver and shiny, this is not how they would have looked when they were made for the king. His armour was actually black and gold in colour. During the 19th century all of the armour was excessively polished as it was believed at the time that all armour should ‘shine’, it was therefore polished with Rangoon oil and brick dust which removed all of the original colouration.