‘Lady in waiting’ was the very first symbol of a royal woman. She was a companion of the queen, princess or a high ranking noble woman. She was expected to play Elizabethan music instruments, be proficient in various forms of dances, reading, embroidery, etc. As for the queen, she was required to attend all the requirements. Lady Elizabeth Tyrrwhit was the chief lady in waiting to Queen Elizabeth 1.

Even the clothing was directed by laws in those days. There were sumptuary laws directing the colour and types of clothes for every member of royalty. The dress of each member of the royal class was assigned according to his/her role and it was intricately designed.

The queen’s attire consisted of a rich deep red coloured robe, heavily embroidered kirtle with sleeves in gold. Other members of the upper class also had their dresses made from expensive material and fabric which were usually imported. Ruffs were an indispensable part of the dress for a royal and elegant look.

Royalty ate their food in silverware. The royalty had a taste for spicy as well as sweet foods. Expensive quality of spices and sugar were required for the preparation of their dishes. They had a specific schedule to the number of meals eaten every day.

Breakfast was done around 6 – 7 in the morning. Meal eaten during 12 – 2 at mid morning was given the name of dinner. Supper was the main meal of the day which was accompanied by different forms of entertainment. This was scheduled around 6 – 7 in the evening.

Elizabethan society was male dominant even in the case of upper class women. They were used to form alliances with powerful families through arranged marriages. The tragic story of Lady Jane grey illustrates the oppressions practised on Elizabethan upper class women by the men. She was executed by beheading at the age of seventeen years only for disobeying the orders of the male members of her family. For the very same reason, Queen Elizabeth 1 never married. 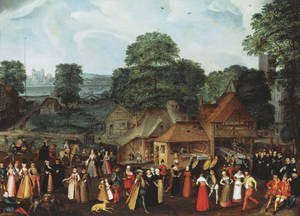 These are the major characteristics which separated the royal class from the other classes of Elizabethan England. Thus, the royalty had a classy style to whatever they did and however they did.