George Inn Theater History: During the reign of Queen Elizabeth, theatre gained a lot of popularity and it is even regarded as the golden era of art and literature so did the George Inn. World famous playwrights like Christopher Marlow and William Shakespeare produced a number of great works which are still cherished by millions throughout the world.

It started off with the troupes of the artist performing in public places and slowly gave way to a performance in private in yards as it proved to be inexpensive and they could still make a profit out of it.

Hence a makeshift stage started to be constructed on which the plays were performed. One such famous site which held a number of plays which included that by Shakespeare’s own troupe the Chamberlain’s men was the George Inn. It was located at Southwark in the Borough High street and Elizabethan plays were held in its yards in the period of 1576 to 1594.

It had a temporary stage on which the actors would perform and the audience would watch in the yard or from the balconies which came at a higher price. 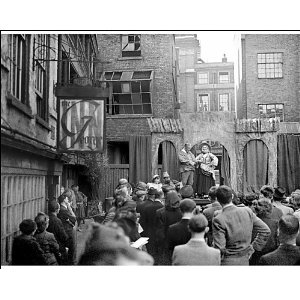 It could house five hundred people in one sitting. It is one of those places of which soma history has been traced which dates back to the year 1542.

It has been found that the inn existed a few years back from the year 1542. It was surrounded by a courtyard on three sides and had big and two-tiered balconies which could hence seat a greater number of people in it so that each of them got a better view.

It was visited by William Shakespeare on numerous occasions, which lived in its vicinity and is believed to have performed there. Unfortunately, it got burnt by a devastating fire in the year 1676. 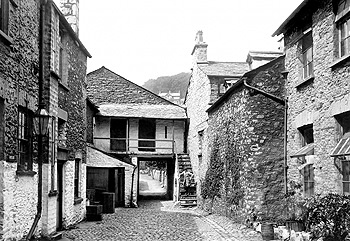 It was then built again following the original plans of the building and thereafter has survived the ravages of time and still stands there through a part of it was destroyed by the Goods office of the Great Northern Railways. It is now under the maintenance of a National Trust because of its historical background and contribution to the growth and development of Elizabethan theatre.

It consists of a pub as well as a restaurant and even holds a stage which functions to hold plays written by Shakespeare. Sadly the only side which remains as of now is that on the south because of the destruction by Great Northern Railway who had intended to build a warehouse there.

Therefore the George Inn can rightly be called the sole Elizabethan inn to have survived the ravages of time and serve as a means of tracing the history of the Elizabethan theatre back to the inn yard activity.