The Elizabethan era is famous for bringing heels into fashion from France. Shoes in Elizabethan times were very different from the shoes now. The laws of clothing extended to shoes as well. The types and styles of shoes that the upper crust of the society wore were quite dissimilar to the ones worn by the commoners. The material, style and even the length of the toes differed.

There were many kinds of Elizabethan shoes, like boots, buskins, chopines, start-ups, etc. The footwear was different for men and women excepting certain types of boots. Boots were generally of leather, soft or crinkly and used while taking a ride or a walk. The gamache was another kind of boot, but long one. Buskins were boots or shoes that reached the calf. 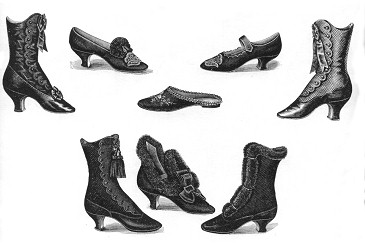 Startups were made of leather, worn as protection while outside. Pumps were like slip ons with single soles. Chopines were slip ons as well, just wooden with a leather cover. Clogs were the working man or woman’s footwear, made of wood. Corked shoes were thus named because there was a block of corn inserted between the feet and the soles.

Galoche was a worn over the shoe as a shield. Pantofle was of two kinds, and indoor one like slippers and one for outside like a covering. Pinsons were soft shoes. Women generally wore shoes made of leather. The nobility and the upper classes also wore satin covered shoes. Elizabethan shoes were the first ones ever to have heels on them. This fashion became the rage and everyone began emulating these. 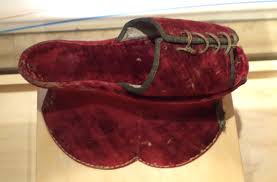 Chopines were very commonly worn while going out into the London streets. Although the women were not allowed to bear their ankles in public and therefore, shoes were not really seen. It did not stop women from flaunting latest styles in shoes. Elizabethan shoes for women were soft, often kid slippers with cork soles and heels. The Elizabethan women belonging to upper classes used silk, embroidery, brocade, cut and slashes, ribbons and coloured glass gems.

The men usually wore boots while riding. The laced boots came into use during the Elizabethan period. Pantofles were a common favourite. Long toes became prominent, with the end being pointed and such shoes were known as poulaines. The materials used for making shoes were leather, the most common ones. Others include silk, satin and velvet. Gold or silver thread was often used to embroider the shoes.