Sir Frances Walsingham was a staunch Protestant in the court of Queen Elizabeth I, he served the queen faithfully in the role of spymaster. He is known to have had many spies in all of the royal courts of Europe one of which was reputed to be Christopher Marlowe.

While regarded as being a Government Administrator for Elizabeth I, there was not much going on in the royal court or indeed across Europe that Walsingham was not aware of. He is more widely remembered for the role he played in the trial and subsequent execution of Mary, Queen of Scots.

When was Sir Francis Walsingham born?

Francis Walsingham was born in Chislehurst, Kent in 1532 to a wealthy family. His parents were William Walsingham and Joyce Denny.

His father was a lawyer, he saw that his son received a good education and after attending King’s College Cambridge he travelled to Europe to continue his studies. Upon his return to England in 1552 he committed to further study at Grey’s Inn, London before again returning to Europe to further his education.

Francis Walsingham became a Member of Parliament in 1562 where his talent caught the eye of William Cecil, Lord Burghley who, by 1568 had Walsingham in his employ. As Walsingham was fluent in many European languages, Lord Burghley wanted to use him to spy in the foreign courts in order to identify any threats to Queen Elizabeth or the country as a whole. It did not take Walsingham long to have spies installed in all of the important courts in Europe.

What religion was Sir Francis Walsingham?

Sir Francis Walsingham’s religion was Christian Protestantism. He wanted to drive out Catholicism by the means of Protestantism and in that end legalised torture of Catholic priests and the ones suspected of preaching Catholicism.

Frances Walsingham served as Ambassador to the French Court from 1570 to 1573. During this time he was charged with arranging the marriage of Queen Elizabeth to the Duke of Anjou, though this never came to fruition. He was elevated to the role of Secretary in 1573 and received his knighthood in 1577.

Still a Member of Parliament he was able to keep Lord Burghley in touch with what was being discussed in the House of Commons, while Burghley himself make notes about the House of Lords.

Why was Sir Francis Walsingham important to Elizabeth?

From 1585 to 1590, Walsingham worked closely with William Cecil and then Baron Burghley to prepare England for her war with Spain. He even had to work on the naval and military forces of England to be able to face the Spanish Armada as Spain was a very strong country under the control of King Philip II.

A look at his career gives us a clear idea that he was an advisor on whom the Queen depended for the smooth functioning of her empire. During his service under Queen Elizabeth I, he received large sums of money which he selflessly spent in the Queen’s service and for the Protestant causes.

Sir Francis Walsingham as the Spymaster

It was through the extensive spy network put in place by Walsingham that the threat to the queen, known as the Throckmorton Plot was discovered in 1583 as well as the Babington Plot in August 1586.

While Walsingham was aware that many of these plots were linked to the machinations of Mary, Queen of Scots no evidence could be produced to convince the queen of her involvement until the discovery of the Babington Plot. 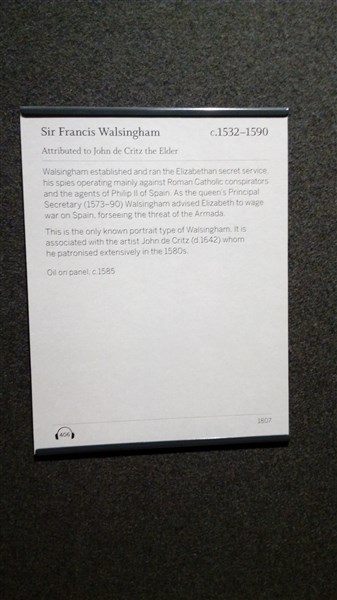 Letters were revealed that had been sent to Babington by Mary herself, evidence which the Queen could not ignore and was sufficiently convincing enough for a trial to be arranged followed by Elizabeth agreeing to sign Mary’s death warrant. Sir Francis Walsingham was committed to the service of his queen and was a loyal and trusted member of the court until his death in April 1590. Possibly his most famous and most appropriate quote is that of “See and keep silent.”

What did Sir Francis Walsingham accomplish?

Sir Francis Walsingham, through his clever decisions and efficiency, became one of the foremost statesmen and diplomats of England in the 16th century. He was Queen Elizabeth’s principal secretary and became known for forming a highly efficient intelligence network to protect Elizabeth from her enemies.

How did Sir Francis Walsingham die?

In England, Walsingham lived in Seething Lane and even had some houses in other parts of the country. However, in 1590 Sir Francis Walsingham passes away. He spent the last couple of years of his life nursing ill-health. Despite his health conditions, he continued working till a day or two prior to his death.

Walsingham did not die a wealthy man and he had incurred great debts. Sir Francis-Walsingham had made a will in 1589 as per which his wife, Ursula was the sole executor of his will. According to this will, his daughter, Frances who had married Earl of Essex was to get 300 pounds annually and Ursula was to be the residuary legatee.

Where is Francis Walsingham buries?

Sir Francis Walsingham was buried privately in a small ceremony at the old St. Paul’s Cathedral in London which got destroyed in a fire in 1666. His name was henceforth encrypted in the list of the important people whose tombs were lost in the fire.