One of the things that make the Tudor period stand out from another era in history is the fashion. The clothing worn at court was far more sumptuous than anything that had preceded it. This is partly because new fabrics were becoming more widely available thanks to England being able to trade with more countries than ever before, and partly because people were more aware of how they looked and the impression that it gave to others about their wealth and social standing.

Tudor dress had many parts and layers

The dress worn by a Tudor lady would consist of many different layers and parts. The bodice was separate from the skirt, and the sleeves were separate from the bodice, and there were several layers of undergarments all designed to add to the finished look. 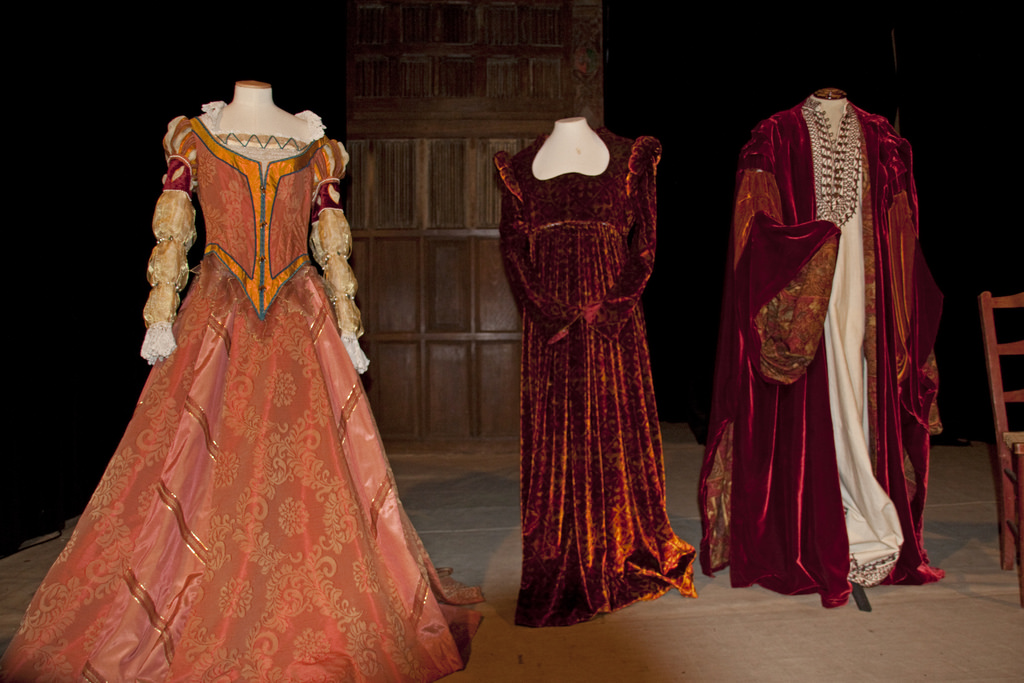 Tudor clothing was not the most practical, it could be heavy and all of the different layers could make it hot and uncomfortable, especially in summer. Tudor fashion means that often the skirts of a lady were so heavy that rolls were tied around the ladies waist to help bear the weight of the fabric in her skirts.

Fashion styles differed between the various levels of the nobility. However, an individual was not allowed to wear just anything. The Sumptuary Laws which were passed dictated the choice of styles, materials and colours that were available for use by the different classes.

This ensured that the rank, or position of a man or woman in society could be easily recognised. The king of course could wear anything, of any material or colour. The use of purple was restricted to those that had been made a Knight of the Garter or held the rank of Duke, Marquis or Earl. For all other social ranks, the colour purple was not permitted to be used anywhere.

As said previously, Tudor fashion involved the use of many different layers. The outfit for a Tudor lady could include up to sixteen different items. These included the overskirt or gown, separate sleeves, a ruff, cloak, hat and shoes as well as all of the under layers which included a smock, shift or chemise, stockings, a farthingale, a roll to support the skirts, a stomacher, petticoat and kirtle as well as a forepart and partlet.

As you can imagine, getting dressed could take quite some time and required the assistance of a servant. Tudor fashion for men sill involved layers, but not as many. A man would wear a doublet with separate sleeves, breeches and a belt, a ruff, a cloak, shoes and a hat as well as a shirt, stockings or hose, a codpiece and a corset.

Tudor Hats Were an Indication of Social Class

Hats were an essential part of Tudor costume for both men and women. Social status was also indicated in the style and size of the hat, with the tallest and most elaborate hats belonging to the most powerful and influential men. The poor men of the country were left to wear flat woollen caps. Women had a choice of several styles of headwear, with the style of headwear dictating the way that they could wear their hair.

Poor people in the Tudor era wore simple and loose-fitting clothes which were comfortable to work in. Men usually wore woollen tunics and trousers. Women wore dresses that were also made of wool with an apron over it. They also wore a bonnet over their head.