There were many different keyboard instruments in use during the Tudor period. While some of them were instruments that had originated in the Middle Ages, they were still very much in use, and being played alongside the new instruments that were being introduced throughout the Tudor era.

Many of the new instruments were introduced from the royal courts of Europe and brought a whole new range of sounds to the English court. The paying of a number of different instruments together was still somewhat unusual, but it paved the way for the creation of the modern orchestra. It also opened the doorway to the creation of new types of music, from which new dances evolved. 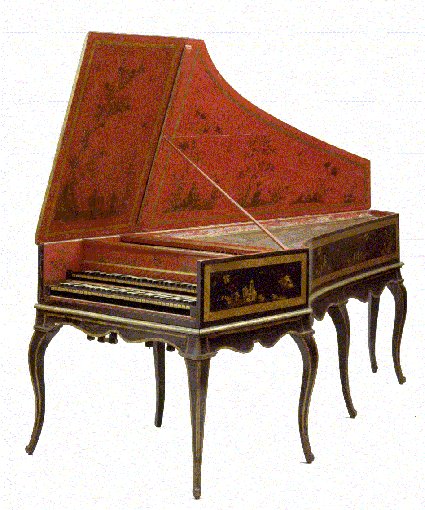 The spinet is a part of the harpsichord family of instruments. It looks very similar to a modern upright piano, though a little smaller and more compact in nature. Also, rather than the strings being hit with a hammer as they are in a piano, the strings of the spinet were activated through plucking.

The spinet, like the other members of the harpsichord family, is believed to have evolved from the combination of a keyboard to a psaltery, with the keyboard providing a mechanical means of plucking the strings, rather than the manual method using the fingers. A psaltery was similar to a lyre on which the strings could be either plucked or bowed.

Keyboard instruments were very popular at court, but due to these instruments being of a fairly large size, bulky and expensive to buy, they were out of the reach of most of the population. The common man could however still enjoy keyboard music at church, where the church organ was a regular feature, and religious music very popular.

The sound from the church organ is generated from air being pumped through sets of differently sized pipes which is activated by a bellows attached to the keyboard and provides a very distinctive sound. The harpsichord also looks similar to a piano, like a small baby grand piano in style. Though unlike the piano there are no hammers to strike the strings to produce the tones, the strings of the harpsichord were plucked. 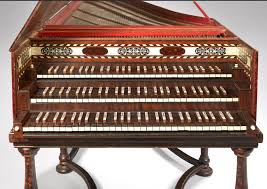 The body of the harpsichord could be very ornate with carvings to the legs and the use of wood inlays to provide an elegant design. The clavicytherium produced a similar sound to that of the harpsichord, though it was vertically strung which meant it resembled more of an upright piano than a baby grand. The virginals were popular with Elizabeth I who was known to be a very proficient musician with this instrument.

Again the strings of the instrument are plucked rather than struck. Some of these instruments could make added or altered sounds from different keys on the keyboard through the use of foot pedals on a piano or the valves on a church organ. The traditional church organs that are still in use around England today, provide the same musical tones that were enjoyed in the sixteenth century.

The Church Organ was another keyboard instrument which was played with the help of a bellow and a complex keyboard. The keyboard was large and difficult to control.