William Cecil, Lord Burghley was born in 1520 in Bourne in Lincolnshire. He was the son of Lord Richard Cyssel (Cecil) of Burghley and Jane Heckington Lady Burghley. He had some notable family connections as his nephew was Frances Bacon. One of his sons followed in his footsteps and became one of the most trusted advisors of Queen Elizabeth I. 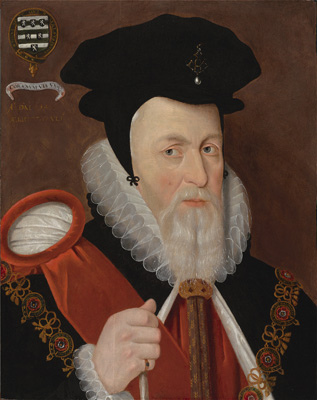 In 1541 William married Mary Cheke and together they had one son who they named Thomas. Sadly for them both, Mary Cheke died the following year. In 1545 William married again, this time to Mildred Cooke was was widely regarded to be one of the most learned women in England at the time. Together they had three children, two daughters; Mildred and Anne and in June 1563 a son Robert.

William Cecil was a Protestant and rose to prominence in the court of King Edward VI. He was wise enough to avoid being drawn into the scheme to pass the throne to Lady Jane Grey upon the death of Edward. His lack of involvement kept him in the good virtues of his new and rightful queen.

He was knighted in 1551 and in 1552 Sir William became Chancellor of the Order of the Garter. Despite his queen being a staunch Catholic and him a loyal Protestant he continues to thrive at court.

He served Mary as a successful diplomat and was also elected to Parliament. Upon the death of Queen Mary I (Bloody Mary) he is given the role of secretary to Elizabeth the new queen. He continued in this role until 1572. In 1571, with the title of Lord Burghley he held the position of Lord Treasurer.

Knowing that Mary was a threat to Elizabeth, and that she was involved in a number of plots to escape her imprisonment and take the throne; a vast network of spies was created. It was through this intricate network of spies that a plot to overthrow Elizabeth was discovered.

Lord Burghley along with Sir Francis Walsingham played a leading role in bringing the plot to light and to the attention of the queen. Evidence was presented the queen that proved that Mary had been involved in the plot with Babington, providing Elizabeth with the evidence she needed to remove Mary for her life for ever. Mary was subsequently executed for high treason.