Crime and Punishment during Henry VIII Rule: The punishments for crimes committed during the reign of Henry VIII and the rest of the Tudor period were very cruel and violent. For many crimes, especially amongst the noble classes the punishment was often execution, sometimes following an imprisonment in the Tower of London; especially during the time of Elizabeth I.

While the event was not open to the commoner, it was still witnessed by several hundreds of spectators made up of royalty, nobles, and courtiers.

During the Tudor period, there were simply two social classes, the nobility and then everyone else. For the nobility the least that they could expect in the form of a punishment was the confiscation of their lands and titles,

With at the extreme end of the scale, death by one of several means, beheading, burned at the stake or being hung, drawn and quartered. The method of execution was determined by the scale and severity of the crime. 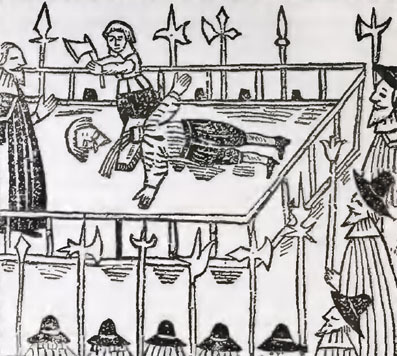 Murder, treason (both petty and high treason), rebellion and heresy were charges common to both classes. The crimes most often committed by the poorly included theft, begging, poaching, debt, fraud, and adultery.

All punishments were harsh, there was no lenient option. Men could be hanged for theft. Being caught poaching at night carried the death sentence, though it did not of you were caught poaching during the daytime. Those charged with begging were often beaten until they were driven to the town walls, though repeated offenders would face the gallows. 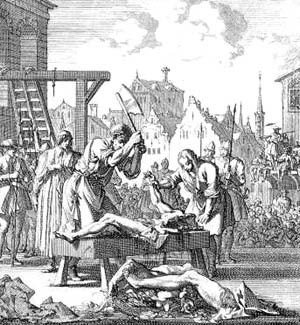 Even what were considered to be minor punishments included sentences such as amputation, being branded with hot irons and starvation as well as punishments such as The Drunkard’s Cloak and the Gossip’s Bridle.

Torture was viewed as an effective and valid way of obtaining information or a confession from a prisoner. Many of the methods of torture that were employed during Tudor times had been in use since the Middle Ages.

Common methods of torture at the time included the ripping out of teeth or fingernails, beating and breaking a prisoner’s bones, whipping and flaying as well as physical mutilation such as castration or tongue removal.

Special equipment was created to ensure that the prisoner would comply or face death, such instruments of torture included The Collar, the Rack, and the Thumbscrew as well as the continued use of Stocks, the Maiden, and the Ducking Stool.

An individual skilled in the art of torture could prolong the agony of the prisoner by delaying their death for days or weeks in order to elicit a confession of guilt.