The term Sumputuary law has been derived from the Latin words ‘Sumptuariae leges’ meaning the laws brought into force in order to systematize the habits of people in clothing, food, trade or business, to maintain social hierarchy, etc. The Sumputuary laws were passed in 1571 during the Elizabethan period. As per this law, every person who is above six years was to wear a woolen cap on Sundays and holidays.

Elizabethan clothing law for women was very strict. There was also an restiction on the fabrics and materials that were used for making the clothes. Along with the restriction mentioned above, the women belonging to the upper classes of the society were allowed to spend only 100 pounds a year on their clothing.

According to this law only the Dutchesses, Marquises and the Countesses could wear any cloth made of silk, fur or tissue. Also something like silk, satin, mixed or embroidered clothes having gold, silver or even pearl on them was srtictly reserved for the aristocratic class.

Even fabrics like velvet, furs, laces on the dresses made of gold or silver were only for the women belonging to the wealthy classes, or the wives of Knights of the Garter and the Privy Council, Privy Chamber and Maids of Honour.

Another limitation imposed was the wearing of gowns that either had velvet, leopard fur or any silk embroidery. Also enameled chains, buttons , agelets and borders were again specific to the upper classes. Usage of Silk Grosgrain, Camlet or Kirtles of Stain were permitted for women who were wives of the sons of the Knight’s heirs, and their daughters or even those who could afford to spent 40 pounds year on their fashion. 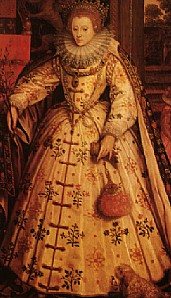 The use of Velvet, Satin, Gold or Silver in the petticoats was only permissible for women who were wives of Barons, Knights, or were Maids of Honour, and Damask or other materials made from silk were to be worn in the petticoats by the daughters of the Knights.

It can thus be seen that the Sumptuary laws forced the Elizabethan people to abide by it. As a result of the enforcement of this law, there was only a certain type of fabric and material used by the different sections of the society which in turn helped in the easy identification of the person’s social ranking.