Richard Hawkins was born in 1562 and was the son of Sir John Hawkins. He was also regarded as the Elizabethan Sea Dog. In 1582, he for the first time went on an expedition with his uncle William who had captured the Spanish treasure. In the same year, he had gone with his uncle, Sir Francis Drake to the West Indies.

After watching his two uncle’s success, Richard wanted to be like them and be successful and famous, like his uncle Drake in particular. 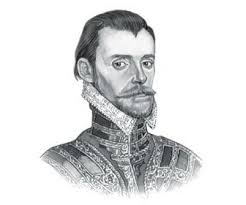 In 1585, he commanded a galliot in his uncle Drake’s journey to the Spanish Main and during the Spanish Armada, Richard was made the captain of one of the Queen’s ship. In 1590, Richard also accompanied his father in his voyage against Portugal.

In 1593, Sir Richard had purchased a ship named Dainty, that was used by his father in his voyages. In 1594, Richard had traveled to Bay of San Mateo where his ship, Dainty was attacked by Spanish ships.

After a brief battle, and after being seriously injured, Sir Richard surrendered on 1st July 1594 and in 1597, Richard Hawkins was brought to Spain and was imprisoned at Seville and Madrid.

It was in 1602 that Richard was finally released and in 1603, he was awarded knighthood on his return to England. In 1604, Sir Richard was the Member of Parliament for Plymouth and Vice-Admiral of Devon. He had chosen Slapton to discharge his duties as the Vice Admiral.

In 1606, when Sir Richard began to discharge his duties as the Vice Admiral, he was involved in the arrest of a servant of a Lord Admiral. This angered Bagge, who was the Mayor in 1606. Bagge would give information about Richard to the Lord Admiral and within no time, there were many complaints about him.

He tried to handle the matter with patience but he was required to go to the Council continuously to answer the questions that had been put against him. He also protested about all the charges against him but he ultimately had to agree that he was using his office for personal gains.

His confession led him to pay the required fine and spend some time in prison. After his term was over, he continued to be the Vice-Admiral of Devon.