There was a vast difference between the food that was eaten by the wealthy and that by the poor in Tudor England. For the wealthy there was access to expensive spices and exotic imported food, whereas for the poor the majority of food accessible to them was either grown or hunted by them.

The development of the woollen industry in England during the Tudor period saw a great deal of arable land, common land that had been used by the poor to grow food, enclosed and used for sheep. While this might have been good for the wool merchants it was devastating to the poor, many of whom died of starvation as a result 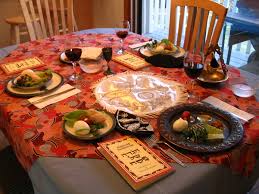 What were the foods available in Tudor Times?

There were a wide range of meats available, but as only the nobility could hunt for some animals, much of it was out of reach of the poor. Rabbit, hare and mutton were popular as were veal, goat, lamb and swans. There was also a great deal of seafood available at the time such as eels, salmon, herring and whiting as well as cod, pike, plaice and trout.

A variety of shellfish were also available but in reality it was only the wealthy that got so varied a diet. Bread was a staple in the diet of everyone, but not everyone had access to the same kinds of bread. The wealthy would eat bread made from fine wheat flour known as manchet, while for the poor their bread was made from rye and barley which made it much more dense and dark.

There were many more foods available to the upper classes than to the common man. The upper classes had access to butter. The food of a nobleman would be flavoured with garlic and include onions and leeks, as well as imported plants and herbs. 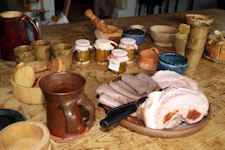 There was seemingly no limit to the number of courses of food that could be provided during a banquet, with up to a dozen different meats being prepared, as well as seafood and poultry. The upper class Tudors enjoyed highly spiced foods, and food which had been sweetened with sugar which was far too expensive for the poor to access.

What was the common Tudor Food for the Poor?

While the wealthy were enjoying lavish banquets, with their kitchen staff cooking for the majority of the day, the poor were confined to three basic meals per day. Breakfast would generally be eaten between the hours of 6am – 7am, Dinner would be between 12pm – 2pm while supper, the most substantial meal of the day fell between 6pm – 7pm.

The diet of the poor heavily relied on bread and beer. However the diet of the poor was rich in vegetables where they were able to grow them themselves, as the majority of food which came out of the ground was deemed to be unsuitable for the upper classes. The same applies to dairy products. Where they could access it they were able to enjoy, milk, cream and cheese, food which the upper classes looked down on.